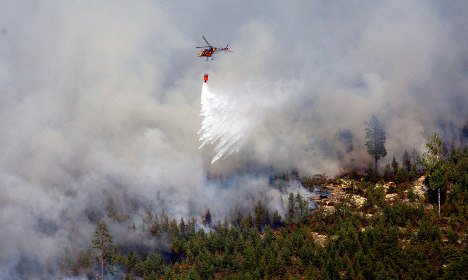 The Swedish fire and rescue service issued a total ban on lighting fires – including privately held barbecues – in several areas on Wednesday, including the island of Gotland and Kalmar county in southern Sweden.

“There has been no precipitation and warm weather for a while now. (…) The more it dries up the greater the risk [of fire],” said Leif Sandahl, fire engineer at the Swedish Civil Contingencies Agency (Myndigheten för samhällsskydd och beredskap, MSB).

“You should possibly even consider whether or not you should completely refrain from lighting a fire or barbecue,” he added in a statement.

People living in the Stockholm area were also advised to avoid lighting fires, although an outright ban had not yet been announced by Wednesday afternoon.

“Even if the ground feels damp in the morning it is in fact extremely dry right now. One should be wary of lighting any fires in the forest and if you organize a barbecue, do it at home or at official barbecue spots,” fire and rescue services control room officer Per Johansson told the TT newswire.

According to Swedish weather institute SMHI, the Blekinge, Västergötland and Värmland regions, as well as eastern parts of southern and central Sweden and along the northern coastline were also at risk of forest fires.

“There is a dominating high pressure front in all of Scandinavia and it looks as though it is going to stick around over the weekend. Next week the weather may shift, but it is difficult to say at the moment,” said meteorologist Marcus Sjöstedt.

Although forest fires are relatively rare in Sweden, Wednesday's warning comes just over a year after one of the largest blazes in modern times ripped through Sala, north-west of Stockholm, forcing thousands to leave their homes.

For most Swedes, however, news of the ongoing warm weather will come as a welcome relief as after weeks of rain an thunderstorms earlier this summer, resulting in a much wetter July than normal, following the wettest May in decades.

The hottest day of the year was at the start of July, with the Swedish weather agency issuing a shortlived weather warning, calling on people to drink extra water and be on the lookout for forest fires.