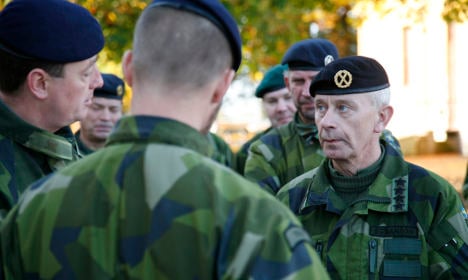 Swedish soldiers from the Trängregementet unit during a visit by Sverker Göranson, Supreme Commander of the Swedish Armed Forces. Photo: Zarah Jonsson/TT
The man, who is based with the Trängregementet unit in Skövde in west Sweden, told police that two men attacked him with a knife in the town of Skara in west Sweden last week after they spotted him wearing his army uniform in a convenience store and then followed him on a moped.
He described his alleged attackers as having long black beards and said they had spoken in broken Swedish, with one saying “you will be the first victim of IS in Sweden” before stabbing him in the stomach.
The soldier also reported hearing one of the alleged Isis fighters shouting “Allah” and “you will die you infidel bastard”. He also showed police a hole in his T-shirt which he said had been made by the attackers and said that small wounds on his stomach were a result of the violence.
Isis (also known as IS or the Islamic State) is believed to have a growing presence in west Sweden, following reports that a number of Swedes have been recruited from the region and travelled to the Middle East to fight alongside the extremists.
But police told The Local on Wednesday that they had found no evidence to back up the victim's claims.
“Nobody can explain his story,” said Thord Haraldsson, chief commissioner for serious crimes in the region.
“We spoke to a lot of people [in the area] and nobody can verify what he said happened.”
According to Sweden's Expressen tabloid, which first broke the story, one woman even said she had been sunbathing close to where the alleged attack took place, and did not spot anything suspicious taking place.
Medical experts who examined the man's clothes and stomach suggested that his wounds could have been self inflicted.
Police decided to share the details of their preliminary investigation after the soldier started posting information about the alleged attack on social media, which they became concerned was whipping up an unsettling atmosphere, Expressen reported.
The newspaper added that officials from Sweden's Security Service Säpo, and the NOA (Sweden's national police force) were also involved in the case as well as regional police.
Sweden's military has launched a separate internal inquiry.
“We can't say much but the investigation is still ongoing to try and make the picture and find out what really happened,” Caroline Karlsson, a press officer for the Swedish military, told The Local on Wednesday.
“We cannot give out any personal information about the man. We are offering him crisis support, so he does not have to be alone right now.”
Meanwhile Haraldsson said that Swedes should not be unduly concerned about the possibility of attacks by Islamist extremists in Sweden.
“No, no, no…definitely not,” he told The Local, adding that the case was “very strange, but not the strangest I have dealt with in my time”.