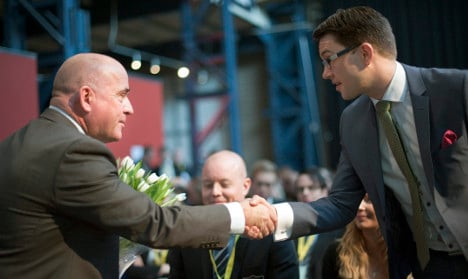 Danish People’s Party spokesman Søren Espersen with Sweden Democrat leader Jimmie Åkesson in 2011. Photo: Björn Larsson Rosvall/TT
After a poll out in Sweden on Thursday revealed that the Sweden Democrats now have the support of every fourth Swede, the Danish People’s Party – seen as a ‘sister party’ to the nationalists — has been celebrating the shifting mood over the border.
READ ALSO: Sweden's nationalists lead polls for first time
“The Sweden Democrats largest in a new poll. 26 percent. Hurray! Maybe normality will be reintroduced in the country sooner than expected,” party spokesman Søren Espersen wrote on Twitter.
Speaking with Danish television network TV2, Espersen — who leads Denmark's second largest party — expanded on his tweet.
“Sweden is an abnormal nation that carries out abnormal policies in comparison to other countries. It is not normal to let 120,000 refugees into your country each year,” he said.
Espersen went on to say that Swedes may be slowly abandoning “the fantasy world that has dominated the Swedish political elite for many years.”
“It looks like the Swedish people might be waking up,” he added.
Sweden’s liberal asylum and immigration policies have long been a concern for the Danish People's Party (DF) and of last September’s Swedish elections, Espersen warned that the country’s asylum influx was “a big danger” to Denmark due to immigrants being able to move freely between the two nations.
“The many Syrians who are coming to Sweden as refugees will become Swedish citizens in a matter of a few years. And with the agreements we have among the Nordic nations, there is nothing to stop them from then immediately moving to Denmark – without a Danish residence permit – and receiving welfare benefits from day one. It is a big danger,” he told the Berlingske newspaper at the time.
The Sweden Democrat party has been gradually rising in popularity since it scored 12.9 percent in the country’s last general election in September 2014.
Some Swedish political analysts said that the party’s historic poll performance could be a direct result of the recent double murder at an Ikea store, in which two people were stabbed to death with one Eritrean asylum seeker admitting the attack and another questioned by police.
READ ALSO: Denmark worried about Sweden's asylum influx
Denmark's most recent general election in June resulted in a centre-right government, with Lars Løkke Rasmussen from the Venstre party returning to the Prime Minister's office.
The Danish People's Party scored 21.4 percent of the vote – becoming the second largest party in Denmark behind the outgoing Prime Minister Helle Thorning Schmidt's Social Democrats – but opted not to enter a coalition with Venstre.