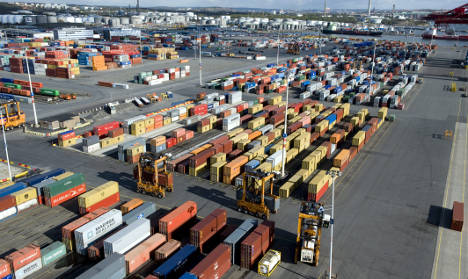 Rising numbers of migrants have been found hiding in Gothenburg harbour this summer, according to port authorities.

Officials have told Swedish media that while staff have long been used to discovering stowaways trying to get into the Nordic country from cargo ships, in 2015 the practice seems to have been replaced by a trend in the opposite direction, with migrants desperate to sail away from the biggest port in the Nordics on vessels heading to the UK.

“They are taking big risks, we are afraid that someone will die,” the port’s security chief Thomas Fransson told Swedish newswire TT on Thursday.

“It’s a very big problem, we are not prepared for this,” he added.

According to Fransson, most of the new wave of secret sailors are from Albania and sneak into the high security harbour in Gothenburg by hiding in cargo boxes, truck trailers and even lorry wheel arches.

“We have electric fences, video surveillance and alarm systems. Dogs are also effective. But we have more than 4000 vehicles coming in and out of the port every day and we cannot search them all,” he told TT.

He said that more than 40 people had been arrested since May after their attempts at hiding in the port were foiled, but said it was unclear how many migrants had successfully made the journey to the UK.

“These are people who are desperate. They are looking for a new future and a better life, and are willing to take big risks. It his already the case that people have been injured,” said Fransson.

Patrik Engström, head of Sweden’s national border police, told TT that officers were also aware that growing numbers of Albanians were trying to reach the UK from Sweden.

“The whole of Europe has seen an increase in migration from Albania. Britain has the reputation that it's easy to get a job and stay there, in the big cities. But the UK is not in the Schengen area, and requires visas for Albanians,” he said.

Sweden, which has a global reputation for openness and tolerance, took in thousands of refugees from the Balkans in the 1990s and has remained a popular destination for migrants in recent years.

But a long backlog of cases has left many immigrants waiting months to have their applications processed and there are signs that some nationalities are starting to avoid the Scandinavian country as a result of the bureaucracy and because of the rise of the nationalist Sweden Democrat party, which is currently leading the polls in the Nordic nation.

Albania is a former communist state with a largely muslim population. It applied for EU membership in 2009, but this has yet to be granted.