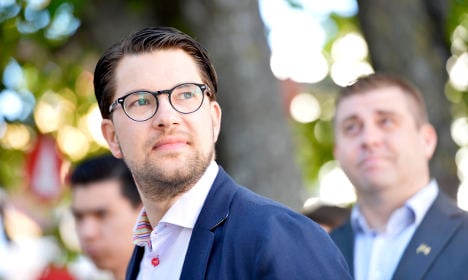 The Sweden Democrat party has been gradually rising in popularity since it scored 12.9 percent in the country’s last general election in September 2014.

But a survey by pollsters YouGov published in Sweden’s Metro newspaper on Thursday suggested that 25.2 percent of those questioned would now vote for the nationalists, who are calling for dramatic cuts in immigration to Sweden.

Prime Minister Stefan Löfven’s Social Democrat party – which remains in favour of helping large numbers of refugees from war torn nations – scored 23.4 percent in the poll. The centre-right Moderates, led by Anna Kinberg Batra who took over from the country’s former Prime Minister Fredrik Reinfeldt earlier this year, saw their share cut to just 21.0, having previously scored higher than their ruling rivals in recent surveys.

The Sweden Democrats, with roots in the country's most radical extreme right, entered parliament in 2010 with the ambition of curbing Sweden's immigration and refugee policy.

“There is a significant amount of dissatisfaction in general with the government, and not least against its immigration and integration policies,
and the begging issue. Many don't see the Moderates as an alternative on these issues so they turn to us instead,” Sweden Democrats party secretary Richard Jomshof told news agency TT in a comment on the strong poll showing.

Political scientists were split on how to interpret the YouGov poll which was carried out last week, following both a high profile campaign by the Sweden Democrats to ban begging on Stockholm’s subway, and a double stabbing outside an Ikea store, for which two Eritrean asylum seekers were arrested, with one admitting to the crime.

Sören Holmberg from Gothenburg University told Metro: “This is not like this is very surprising. We have long seen this tendency that SD [the Sweden Democrats] are heading for an increase [in support]”.

Stina Moran, another political expert, said the survey suggested that other mainstream parties had not done enough to shape debates in Sweden about immigration, but argued it was extremely unlikely that the nationalists would win the next election in 2018.

She said that the timing of the poll provided “special circumstances” that may have made respondents more supportive of the Sweden Democrats.

“It was made in connection with the murders at Ikea. The mood on the web and on social media was incredibly hostile just then,” she argued.

“Of course one in four Swedes are not racist or want to throw out immigrants, they just want to stir the pot and get the other parties to listen to their concerns.”

The YouGov survey is based on interviews with 1,527 participants partly selected through an online application process where respondents themselves sign up. Although the pollster has been known to accurately predict shifts to smaller parties in the past, its method was also widely criticized on Thursday.

“The problem with YouGov is that they don't use randomly selected people. This is a self-recruited panel where we don't know in what way respondents differ from the population as a whole,” political scientist Andreas Johansson told the Expressen newspaper.

And the chief executive of Stockholm-based pollsters Novus hinted that his organization would be presenting a different result later in August.

“Take it easy and breathe,” he wrote on Twitter. “At the moment [our survey] looks dramatic, but not this dramatic.”

After Germany, Sweden recorded the second biggest number of asylum applications in the EU in 2014 — 13 percent, although as a proportion in relation to its population size, the country is shouldering the biggest burden in the 28 member bloc.

However there are signs that refugees are starting to shun the Nordic nation — which has a global reputation for openness and tolerance — as news spreads about long processing times.
A report by Sweden's Migration Board (Migrationsverket) last month suggested that the number of predicted asylum seekers in 2015 would be around 74,000, compared to the 90,000 it suggested in February.