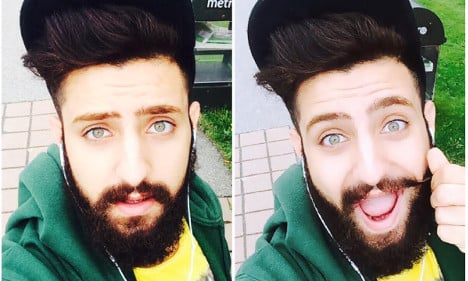 Mahmoud Bitar. Photo: Private
Syrian YouTube star and asylum seeker Mahmoud Bitar spent three years trying to move to Sweden, bouncing between different countries in the Middle East after fleeing violence in his home city Aleppo, before travelling by boat to Greece and then heading north to Scandinavia.
He documented some of his journey on Instagram, where he has almost 60,000 followers, and went on to make YouTube videos in Arabic joking about life in Sweden once he finally arrived at his dream destination.
But the social media fan, who describes himself as a “fun comedian”, was virtually unheard of among non-Arabic speakers until earlier this week, when the BBC posted a video in which the refugee is seen telling viewers in English “don't come to Sweden – or at least think carefully about it”.
Bitar explains that many Syrians have unrealistic expectations about life in the Nordics, assuming they will get access to large homes and cars. He jokes that in reality life can be boring and immigrants are often forced to rely on government handouts and loans from friends.
His comments have since gone viral, with the video picked up by news networks in Sweden and shared widely on social media. Mahmoud Bitar. Photo: Private
“There has been a lot of reaction from people. We have had positive and negative comments,” he told The Local on Thursday afternoon, adding that many of the messages he had received had been threatening.
“I love Sweden and there has been some misunderstanding,” he explained.
“I said you should think carefully if you are going to live in Sweden because you must be hardworking. The BBC cut that last bit out.”
He added: “There are some people, some people…maybe ten percent…who think if they come to Sweden everything will be easy and free and that is what I told them. That idea is not true. You have to work here. All the refugees must be hardworking,” he added in Arabic, with his comments translated into English by his manager Dr Majd Abdulghani.
Asked if he had in fact revised his comments slightly for fear of further reprisals or being sent back to his home country, he said: “Well there have been some bad comments and I am still afraid. That is why I want to send a message now to the Swedish government to get an ID or a permit. If I get one then I can work here. This is my choice, to be in Sweden now.” Mahmoud Bitar with his manager Dr Majd Abdulghani (right) who is also from Syria and says he does not take a fee from Bitar. Photo: Private
The Swedish Migration Board (Migrationsverket) does not comment on individual cases, but according to Bitar, he can expect to wait up to a year before he is given a personal number, which he needs before he can get a job in Sweden.
“I had an interview [with Migrationsverket] and then I was told I would have to wait another seven months so in total it will be a year. In the meantime I cannot get work or study,” he told The Local, adding that he was currently living on 1800 kronor ($211) a month from the Swedish government, as well as hand-outs from friends.
There signs that some Syrian refugees are already starting to shun Sweden — which has a global reputation for openness and tolerance — as news spreads about long processing times for asylum applications.
The Nordic nation currently takes in more refugees per capita than any other EU country, but a report by Sweden's Migration Board (Migrationsverket) last month suggested that the number of predicted asylum seekers in 2015 would be around 74,000, compared to the 90,000 it suggested in February.
“Yes, many Syrians have heard bad news about Sweden recently. They know it will take a long time [to secure a residency permit]. This is putting them off coming,” confirmed Bitar.
“'We don't prefer Sweden any more', it is true that is what people have said,” he added.
But Bitar insisted that he had no regrets about his decision to move to Borås, a small city in the south west of the country.
“I am free now. This country respects humans. I enjoy the nature and the water and gardens. There is good sightseeing here and it is very safe in Sweden,” he said.