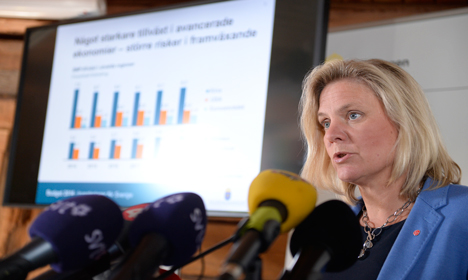 The economic prognosis delivered by Swedish Finance Minister Magdalena Andersson, on the sidelines of budget consultations in Harpsund, was decidedly sunny.

“Sweden can expect better years ahead,” she said. “Growth is brisk, unemployment is falling and the government’s finances are improving.”

The prognosis is not all that different than the one made by the government in June, but now unemployment is expected to fall more quickly than expected, thanks in part to new job investments planned for 2016. The prediction is for unemployment to fall from 7.1 percent next year to 6.2 percent in 2019.

Despite the good news on jobs, Andersson warned about certain risks on the horizon, including economic developments in China.

In addition, it’s still uncertain whether the government can reach its ambitious goal of having the EU’s lowest jobless rate by 2020. For that, it would need unemployment to fall to under five percent.

“With the measures we are introducing and our prognosis we are considerably closer to our goal now than we were in June,” Andersson said.

However, Mats Dillén of the National Institute of Economic Research warned of too much optimism.

“That is a little more positive than our opinion when it comes to job market developments and unemployment,” he told the TT news agency.

The government has so far announced new programs for around 13 billion kronor ($1.6 billion) for 2016, including large investments in housing, lower taxes for pensioners, additional spots in vocational schools and more money for defense. New spending on the environment is also expected.

The reforms will be paid for by tax increases of around 25 billion kronor ($3 billion), including higher payroll taxes for young people, as well as higher gasoline and energy taxes. Increases in income taxes for high earners and for those who work after the age of 65 are also on the horizon.

The economic policy spokesman for the opposition centre-right Moderates, Ulf Kristersson, said his party wasn’t too impressed by the budget plans.

“In the short term, the government is doing nothing to address problems of increasing expenditures around sick leave, immigration and the fraud and abuse among some social-welfare services,” he said.