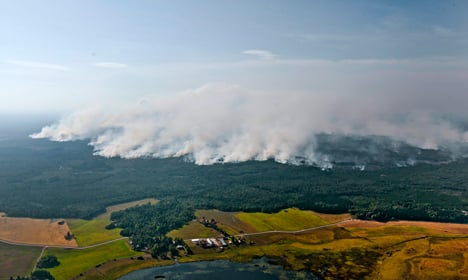 Last Wednesday, the Swedish fire-and-rescue service issued a ban on lighting fires in several areas, including the island of Gotland and Kalmar and Blekinge counties in southern Sweden.

Now people in Stockholm and Uppsala counties will have to think twice before striking any matches outdoors.

The Greater Stockholm Fire Brigade announced that lighting fires outside the home is forbidden in the two counties although barbecuing on one’s own property or at specially constructed barbecue grill sites is still allowed.

“However, be aware that all barbecuing is done at one’s own risk,” said the brigade’s press release.

The Swedish Civil Contingencies Agency, or MSB, warned earlier this week of the extremely high risk of forest fires that had developed during the hot, dry weather.

“If you are considering having an open fire, it’s important to be prepared, be knowledgeable about the risks, find out if there is a open burn ban, how you will manage the fire and be aware of any sparks or embers so that a fire won’t spread,” Leif Sandahl, an MSB fire engineer, told Swedish tabloid Aftonbladet.

Despite the warning, many Swedes are enjoying the sun after a less-than-stellar summer. A wetter-than-normal July came soon after the wettest May in decades.

Fire risks are likely to decrease next week, when clouds are predicted to move in and the chance of precipitation is set to increase.