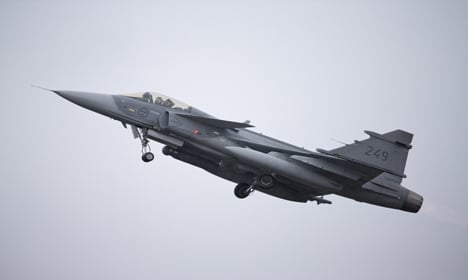 In the interview with the Dagens Nyheter newspaper, Hultqvist called the Russian government under Vladimir Putin authoritarian and nationalistic and said closer military ties with the US could help preserve peace and security.

The announcement comes in the wake of a visit to Stockholm last Wednesday by US Senator John McCain, during which he met he met Swedish Foreign Minister Margot Wallström, Defence Minister Hultqvist and Supreme Commander of the Armed Forces Sverker Göranson. Discussions about Russia were high on the agenda.

“John McCain as chairman of the Senate Committee on Armed Services plays a central roll in American policy, even if he’s not part of the administration,” Hultqvist told the paper. “His coming to Sweden was not only a courtesy call, but part of a process that is about deepening and developing our cooperation with the US.”

Hultqvist himself visited Washington in May, meeting McCain, Deputy Secretary of Defence Robert Work and other lawmakers.

The two countries have developed a working plan where Sweden and the USA will tighten defence ties in five areas: interoperability, training and instruction, material cooperation, research and international operations.

The move has been motivated by Russian actions that are upsetting the security situation that has reigned in Europe since the end of the Cold War in 1991, Hultqvist said.

“Russia annexed Crimea in violation of international law and has been fuelling the military conflict in Ukraine,” he said. “This has contributed to a changed security situation in Europe and is a difficult reality that we have to live with.”

Earlier this year in June, a report by the US-based Center for European Policy Analysis (Cepa) claimed that some 33,000 Russian soldiers rehearsed a military takeover of the Baltic Sea area in March, including practising the seizure of Gotland off Sweden's east coast.

That followed an incident last September when two SU-24 fighter-bombers allegedly entered Swedish airspace in what the former Foreign Minister Carl Bildt called “the most serious aerial incursion by the Russians” in almost a decade.

Hultqvist told the paper that he is carrying out a resolution on defence passed by parliament in June. It said that Sweden should deepen its military cooperation with Finland, NATO and the US, among others. Five parties supported the resolution.

When asked if there were any negative consequences about closer ties with the Americans, Hultqvist said that he wasn’t interested in conducting a historical review, but that the current situation meant it was in Sweden’s best interests to develop its cooperation with neighbouring countries and strengthen transatlantic ties.

“It’s about creating a balance and that includes a strategy to preserve peace and security,” he said. Closer cooperation would decrease the risk of attack, he added.