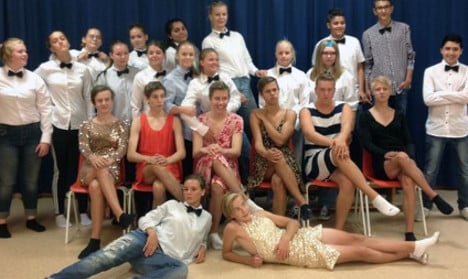 Snäckebacksskolan students took photos on a mobile instead. Photo: Private
The pupils at the high school in Ronneby in southern Sweden said that they initially came up with the idea of dressing up differently for their annual photo as “a bit of fun”. But they ended up launching something of a political campaign on social media after their teacher told them to take off their outfits and change back into the clothes they had worn to school that morning.
“We didn't take it so seriously from the beginning,” explained Tuva Jarleberg, 15, who is spearheading the teenagers' efforts to question their school's approach to gender equality.
“It turned more serious when our teacher just said outright: 'guys can't wear a dress'. From that moment it made us think a lot about LGBTQ and Pride and things…and we just thought it was the wrong approach to give us, because we thought ours was the kind of school where everyone is equal and you should be accepted no matter what you wear.”
Jarleberg explained that some photos of the cross-dressing students – which were being shared widely on Monday – had been taken on a pupil's mobile phone, before they posed for the official snap dressed in their usual clothes.
“We are very upset about what happened to us…If somebody is insecure about what to wear and how to look, we want our photo to create a message that you should be able to be whoever you want to be,” she explained.
However she acknowledged that there was “no one in particular” at the school who currently favoured wearing clothes not typically associated with their gender.

Snäckebacksskolan students took photos on a mobile instead. Photo: Private
A spokesperson for the school, Snäckebacksskolan, was not immediately reachable by The Local, but the school's principal Rikard Andersson earlier told Swedish broadcaster SVT that the students had disobeyed orders not to act as “clowns” during the photography session.
“These images can be used by police and social services and therefore we want the students to look like they usually do,” he said.
But he remained elusive about the students' claims that their teacher specifically suggested that boys should not wear dresses.
“I was not there at that moment, so I do not know,” SVT quoted him as saying.
Sweden has a global reputation for openness and tolerance. In May it scored highest in Scandinavia and fourth in Europe in the a review of how lesbian, gay, bisexual, transgender and intersex (LGBTI) people experience human rights across the continent, by campaign group ILGA-Europe.
Ronneby is a small coastal town with a population of around 12,000. Snäckebacksskolan's male pupils dressing up for the photo. Photo: Private