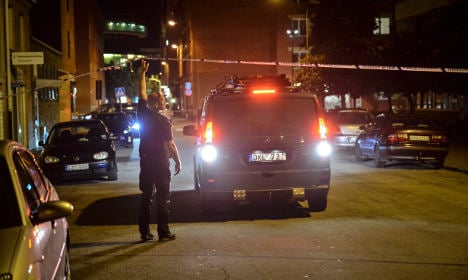 The scene of an explosion in the Möllevången area of Malmö in August. Photo: Johan Nilsson/TT

It is early morning on a sunny day and Malmö is just coming to life. Sweden's third biggest city is slowly getting back on its feet after a long summer of tensions, including numerous shootings, dozens of hand grenade attacks and car burnings. Yet, there is a surreal feeling of normality.

Less than three hundred metres from the scene of one of the latest blasts, fruit and vegetable sellers are setting up their stalls in the main square of the Möllevången area of the city as young academics, immigrant workers, pensioners and parents with children pore over their offerings.

Just a couple of blocks away, in Folkets Park, a lush green space lined with flower plots and blue ponds, Malin Karlsson, 38, is rocking her five-month-old daughter in a pram. She, like many others, is keen to present a different version of her city to the war zone it has been painted as after its summer of violence.

“I feel safe in Malmö. I have lived here for 11 years and was more afraid getting home late at night in Gothenburg, where I lived before. It has a bad reputation – people need to come here to see for themselves that it is so much more than that. I like it here,” she says.

However, the statistics suggest that violent crime in the form of explosions is rocketing in the city. In 2014 a total of 25 blasts took place in Malmö. This year, the tally is at 33 and counting. Malmö's deputy police chief makes no secret of the fact that his organization almost found itself stretched to the limit this summer. But he believes they have turned a corner.

“The total number of investigations, which also includes things not related to the hand grenade blasts, has been strenuous. But we had a strong belief that if we were only given enough resources we would be able to see results,” Mats Karlsson tells The Local.

Earlier in August, Sweden's top national police chief Dan Eliasson announced plans to bolster officer numbers in Malmö after concerns were raised that police staff shortages over the holidays were putting the public at risk. This was followed by Prime Minister Stefan Löfven pledging action to remove illegal weapons from Sweden's streets in a move to meet force with force.

“We can tell that we have had successes. But our dilemma is that we can never guarantee anything for sure. Evidently there are individuals who have hand grenades and they often resort to violence over things that may seem very banal to you or I – a conflict over an ex-girlfriend or a little brother wanting to outperform his big brother,” says Karlsson.

The typical Malmö gang, according to Karlsson, is not really a gang at all. He says there are fluid constellations of young men, aged 20-25 or younger, of various ethnicities – Swedish and non-Swedish – with ever-changing loyalties. Most of them are known to the police. Although there has been a spike in gang-related violence this summer, it is not a new phenomenon, neither to locals nor to officers.

They attack one another other, many say, arguing that there is no need for anyone else to be scared. Yet Malmö is unique in that much of the violence takes place in central parts of the city, rather than in suburbs away from the general public. So, what if you happen to be in the wrong place at the wrong time?

“It's bad enough when they use guns, because they've got such poor aim, but grenades are really worrying. They have a 360-degree reach,” explains Mats Karlsson. But he adds a caveat: “I don't want to question people who say they are afraid, but you should filter the things you read. Media reports are skewed towards Malmö, but when something happens elsewhere it barely gets a mention. I am not scared.”

The first thing any Malmö resident will tell you is that the city has an unfair reputation. It is not as violent as some media might have you think. Yet the violence this spring and summer is exactly what everyone here is talking about: over dining tables, between neighbours, in the street – everywhere you go someone has an opinion.

“Malmö is a really nice city. It's more international and it feels like you're further south in Europe when you're here. But I wouldn't go out alone at night. You read about what has been going on – it's terribly frightening,” says Ann-Christin Persson, 68, who lives in nearby Lund and is in Malmö for the day.

Ann-Christin Persson says she would not go out alone at night. Photo: The Local/Emma Löfgren

“I'm a little scared,” admits Ammar Asfour, 45, who moved here three years ago. “I'm from Syria, so I know a little bit about this. Malmö is a lovely city. But the violence… it's not good.”

The former shop owner from Damascus is spending his summer selling ice cream from a small kiosk in the park and is interrupted by a dad who wants to buy a couple of cones for his twins. The blonde, tousle-haired children happily run off to the playground licking their sweet treats.

But this idyllic image sharply contrasts with another: the park is also the hotspot for Malmö's underground drugs trade. Two worlds operating side by side.

“You do get a bit street smart. If you see a gang you don't walk right into them. It's not okay that they shoot out in the street among people, and you think a lot about the drugs and the weapons. When you walk past a gang you know that at least one of them is carrying a gun,” adds Malin Karlsson, who lives with her young baby and family not far from Folkets Park.

However, this strange co-existence is also part of the problem. An old industrial working class city (Malmö has with only two, short-lived, exceptions been run by the centre-left Social Democrats since universal suffrage came into force in Sweden in 1919), there is a modern-day tendency among many to view its problems almost through a romantic lens, as the price you pay to be able to go to the cool black market clubs or buy falafel for a third of the price as in the capital. This needs to stop, many argue.

“Buying a beer from someone on a lawn, buying cheap alcohol from somebody's trunk, smoking a joint with your pals on a Friday night or buying smuggled cigarettes at a kiosk on the Möllevången square also supports those groups that are now shooting each other in the street,” wrote the head of Folkets Park in an opinion piece earlier in the summer.

His comments are echoed by Mats Karlsson: “Many see illegal clubs as part of Malmö's character. But if you go to them you firstly feed the criminal market and secondly you put yourself in danger by going to the places where the criminals often are themselves.”

“We're not going to present guidelines saying 'don't buy falafel if it costs so-and-so much', but use common sense. Falafel is cheap to produce – I would be more suspicious if it was a chicken kebab for 25 kronor – but it is not just a matter about illegally smuggled alcohol or tobacco. If it's too cheap somebody is probably being taken advantage of. Ask questions.”

Some complain that the police are not doing enough to stop the violence. You used to see an officer on every street corner, they argue: where are they now? But others are quick to defend local officials.

“They do a lot of hidden work that we don't see. But you can't let go of Malmö, you have to keep at it,” says Malin Karlsson.

The deputy police chief agrees when The Local repeats her comments to him. Numerous integration and anti-violence projects have already been tried and tested with varied success, but Mats Karlsson is hopeful that a plan to create three new so-called 'focus groups' with around a dozen officers in each from September will have a long-term effect.

“We have said that we are not interested in being part of any short-term projects any more. We need to work long-term to establish relationships with people and also with the criminals themselves,” he says.

“I think that what this sensible citizen means, is that having police on the street who people recognize is what is going to have an effect.”

He is optimistic, but he does not make any promises. Malmö's summer of violence may be coming to an end, but this is where the hard work begins. Many will be watching closely to see if Sweden's third biggest city can, at last, achieve the change it is hoping for.

In which direction is Malmö heading? Photo: Emma Löfgren/The Local