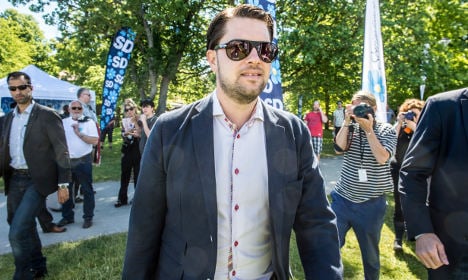 The survey by Novus for broadcaster TV4, published on Tuesday, suggests that 19.4 percent of Swedish voters now support the anti-immigration Sweden Democrats. The party mainly sees support growing among labour union members and people in northern Sweden, according to the pollsters.

The largest party in the opposition, the Moderates, scored 23.3 percent in the survey, down by 1.7 percentage points since June. The centre-right party is mainly losing support among its male base, who are instead turning to the Sweden Democrats, the Liberals, and the ruling Social Democrats.

Among its colleagues in the centre-right Alliance opposition, the Liberal party and the Centre party are gaining, while the poll suggests that the Christian Democrats would lose out on a seat in parliament if an election was held today (scoring only 3.3 percent – less than the required 4 percent threshold).

Although still Sweden's biggest party, support for the centre-left Social Democrats is also steadily decreasing. According to the Novus poll 25.1 of respondents would vote for the party today, its lowest level of support since January 2012.

A separate survey by pollsters YouGov published in Sweden's Metro newspaper sparked headlines last week when it suggested that 25.2 percent of those questioned would now vote for the nationalists – putting Jimmie Åkesson's Sweden Democrats in the lead for the first time in history.

Based on interviews with 1,527 participants partly selected through an online application which respondents themselves signed up for, the poll was criticized by many for its self-recruitment process, including by the chief executive of Novus.

However, while Tuesday's survey still only names the Sweden Democrats as the third-biggest party in parliament, it confirms that its support is growing steadily. The party, which is critical of Sweden's generous immigration policies, has been gradually rising in popularity since it scored 12.9 percent in the country's last general election in September 2014.

After Germany, Sweden recorded the second biggest number of asylum applications in the EU in 2014 — 13 percent, although as a proportion in relation to its population size, the country is shouldering the biggest burden in the 28 member bloc.

However there are signs that refugees are starting to shun the Nordic nation — which has a global reputation for openness and tolerance — as news spreads about long processing times.

A report by Sweden's Migration Board (Migrationsverket) last month suggested that the number of predicted asylum seekers in 2015 would be around 74,000, compared to the 90,000 it suggested in February.