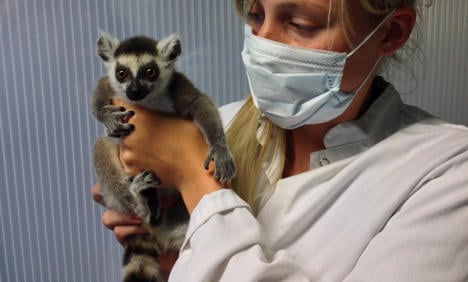 The baby has been named Mr Nilsson. Photo: Skansen
The lemur, who is thought to be just a two or three months old, was seized by police in Vimmerby over the weekend, who discovered the animal inside an apartment.
He was then taken to the Skansen animal park in Stockholm, where he was checked over by vets before being given a new home in the zoo's lemur enclosure.
“He's doing well, there's nothing much wrong with him physically, but he is very attached to people and throws himself around the neck of anyone,” Jonas Wahlström the managing director of Skansen's zoo told the TT news agency on Tuesday.
The animal has been named Herr (Mr) Nilsson by staff at the animal park, the same name given to the monkey in the famous Swedish Pippi Longstocking children's series.
It is illegal to keep endangered species such as lemurs in Swedish homes. Police have revealed that they have arrested two men aged 20 and 21 on suspicion of keeping the animal and said that they had found the body of another baby lemur in a communal garden at their apartment complex.
READ ALSO: No visas for Swedish monkeys bound for Saudi Arabia
Skansen has already taken in six other lemurs over the past year, all of which were found in Växjö in southern Sweden.
Wahlström previously revealed that he suspected the animals had oame from a planned new zoo in the region which never opened and from which a number of animals are believed to have gone missing.
He told TT that his park's latest addition is likely to be adopted by some of the adult lemurs already living at Skansen.
“We have 25 years experience with lemurs, so it will probably all be fine,” he said.
As well as taking in rare animals, Skansen also has a reputation for helping endangered species return to their natural habitats.
Earlier this year a group of cuban crocodiles born at the zoo were flown to Cuba, to help the country's efforts to re-establish the species in the wild.
But four monkeys who were supposed to move from Skansen to Riyadh in Saudi Arabia were given the cold shoulder during a diplomatic spat between Sweden and the oil-rich nation.