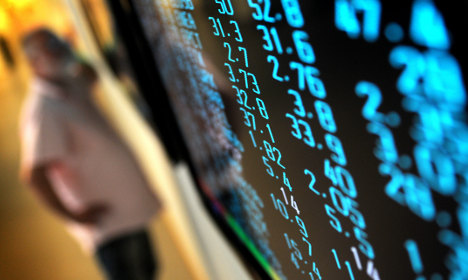 Stockholm's stock exchange rose by 3.1 percent after an hour of trading on Tuesday, clawing back ground after it took a tumble amid global turmoil sparked by Chinese markets suffering their biggest slumps since February 2007, before the last global financial crisis.

It followed the general trend in Europe, which saw the UK's FTSE as well as Germany's Dax and the French CAC 40 recuperating by 1.7 percent in early trading while shares in Italy rose 2.0 percent.

On the other side of the Atlantic, Wall Street was also expected to bounce back at the opening of trading later in the day, after suffering its biggest one-day loss in four years on Monday.

However, the Shanghai composite continued to fall on Tuesday, closing down 7.6 percent, following a period of unstable markets since a shock currency devaluation in China almost a fortnight ago. Tokyo's Nikkei index closed down 4.0 percent.

And Johan Javeus, chief strategist at one of Sweden's largest banks, SEB, told the TT news agency that it was too early to talk about a stable upwards trend for the European markets.

“It's normal after several days with large declines on a market that sooner or later you get a rebound. But that does not indicate that the market has hit rock bottom and is turning around,” he warned.

All eyes remain on the Chinese stock exchange, which has fallen more than 40 percent since June, in fear the turmoil will spark a new financial crisis in Europe. But Javeus advised Swedes to keep calm in the near future.

“It probably takes a lot more than that [to cause a crash], but what is happening is alarming,” he said.

But leading economists in Sweden warned those with cash invested in stocks and shares not to become unduly concerned.

“We have an extremely good period behind us,” said Maria Landeborn on Monday, savings expert for Skandia bank, referring to the past four years of stability in the global markets.

She told TT that while Swedes could see their investments decline in the immediate future, those hoping for a return in the longer term should not need to take any immediate action.

However she added that people with investments tied up in stocks and shares who were hoping to use the money within the next couple of years, for example to buy a new home or a car, should always consider keeping some of their cash in a more secure savings account.

“It's important that you have thought about the risks, and not been greedy and put everything into shares,” she said.