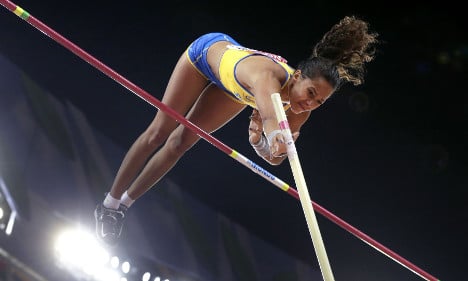 Sweden's Angelica Bengtsson. Photo: TT/AP/Andy Wong
The 22-year-old broke her own previous best by nine centimetres but it was not enough to secure a podium finish, which would have required her to leap over a bar set at 4.80 metres.
"It feels great but I'm a little annoyed that I did not pass 4.80," Bengtsson told Swedish public broadcaster SVT. But she said she would continue to train hard to beat the record in the Olympics in Rio next summer.
"When you think about it, there are only three [people] in the world that have jumped better than me," she added.
Bengtsson has battled with various injuries this year and did not start formally training for the event until June, SVT reported.
Cuba's Yarisley Silva, 28, took gold in the competition after becoming the only athlete to clear the bar at 4.90 metres.
Fabiana Murer of Brazil, 34, scored a silver and Greece's Nikoleta Kyriakopoulou, 29, got bronze.
Bengtsson's new Swedish record was among the most shared stories on social media on Wednesday and follows a successful summer of sport for Sweden.
In June, Sweden's Under-21 team celebrated their first title in history. And in August, Sweden's Sarah Sjöström broke the women's 100 metre butterfly world record for the second time in 24 hours to win gold in the final at the world swimming championships.