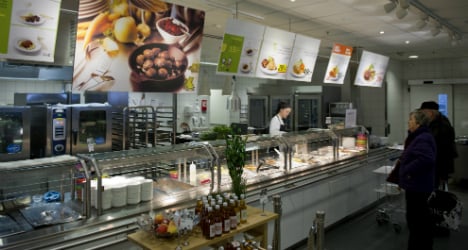 The alcohol is gradually being phased out. Photo: Bjorn Lindgren/TT

“It’s a gradual phase-out. We stopped stocking up at the same rate at the beginning of this year and will keep on selling until we run out,” Anna Pilkrona Godden, a spokeswoman for Ikea Sweden, confirmed to The Local on Thursday.

“There’s no other reason for it than the fact that there wasn’t a great demand for alcohol and we choose to listen to our customers,” she said, saying that there have been no alcohol-related incidents to prompt the move.

Godden said the decision to get rid of alcohol at its restaurants purely applies to Sweden at this stage.

“This is in no way a global policy. Every (Ikea) country can bring in and sell a certain amount of local products if they want to. I don’t know what the others are doing or not doing.”

Sweden has among the strictest rules in Europe when it comes to drink driving and while Godden did not wish to speculate on whether this had had a direct impact on Ikea's new strategy in Sweden, she confirmed that there is a growing trend towards healthier lifestyles in the Nordics.

The decision to phase out alcoholic drinks comes as the company also launches "a greener and healther line of foods" called "New Food Direction".

Ikea in Sweden has sold alcohol at its restaurants for about a decade.

Pilkrona Godden said the initiative, which is in line with the World Health Organisation’s (WHO) recommendations for healthy eating and which is being rolled out at Ikea stores worldwide, includes replacing branded soft drinks in its self-service restaurants with flavoured soda water.

“It’s just half of the sugar compared with soft-drinks.”

“We’re also looking into our portion sizes and to reduce the amount of salt and sugar in the foods,” she said.

Ikea is famous for its food, and particularly its meatballs. When its Norwegian branch this summer changed the way it served the traditional Swedish dish by including vegetables for an extra cost, local health experts went wild, criticising the furniture chain for charging for what was healthy on the plate.