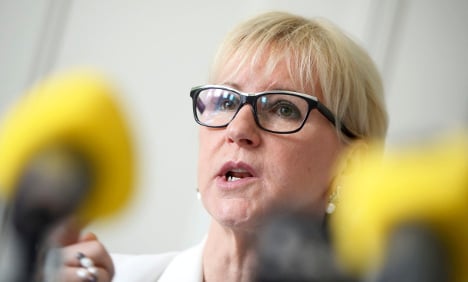 Margot Wallström told Swedish newspaper Svenska Dagbladet on Thursday that the radical extremist group was so dangerous that violent and sexual crimes against women were embedded in its ideology.

“I intend to demand that the Security Council should hold a special meeting on this,” she said.

“We should talk about how we can deal with this effectively…if it were easy it would have already been done,” she said.

The Swedish Foreign Minister spent two years working as the UN first Special Representative on Sexual Violence in Conflict while her Social Democrat party was in opposition, and has continued to campaign against attacks on women and children.

During her United Nations stint she worked to ensure that a landmark resolution was adopted in 2010, putting in place tools designed to secure more systematic monitoring and reporting of sexual violence, and better methods to help identify perpetrators.

Sweden has kept a close eye on the rise of Isis (also known as IS or the Islamic State).

The country’s security service, Säpo reported earlier this year that at least 150 Swedish residents were known to have been to Syria or Iraq to fight for Isis or other related extremist groups.

In June it revealed that between 30 and 40 of those confirmed cases are women who are mostly “involved in logistics and support activities”.

Magnus Ranstorp from the Swedish Defence University told The Local in May that while some women and teenagers were clearly being persuaded or forced to travel to the Middle East by friends and family members, others “look up to the fighters like pop stars” and leave home of their own accord.