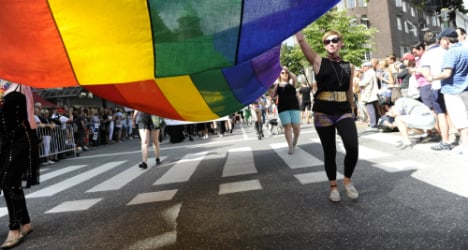 Sweden has earned top marks for its attitude towards the LGBT community. Photo: Erik Mårtensson/TT

The city of Stockholm has announced that it has earmarked eight million kronor ($950,000) to fund the special lessons in primary and high schools in a move to promote and broaden the acceptance of lesbian, gay, bisexual and transgender pupils.

“LGBT students are subject to more violence and threats (than other students) and they suffer more from health problems so it’s important that we deal with these issues at school,” Gita Nabavi, a spokeswoman for Sweden’s feminist party Feministiskt Initiativ which has led the initiative, told public broadcaster SVT.

The programme, which is part of push to increase the awareness of human rights, is due to start in 2016.

“This is long-term work and that’s why it is important to work strategically with these questions and that we include them in our day-to-day work,” Navabi said.

She argued that the establishing of norms start early in life and schools therefore have a big role to play when it comes to shaping them.

The program will be developed in cooperation with RFSL, the national LGBT rights group.

Sweden has a global reputation for openness and tolerance. Discrimination on the basis of sexual orientation is against the law. In May, the country earned the top spot in Scandinavia and the fourth place in Europe in a review by campaign group ILGA-Europe of how LGBT people experience human rights across the continent.

Last year, the genderless pronoun “hen” – which mixes the words “hon” (she) and “han” (he) entered the dictionary, officially becoming part of the Swedish language.

Still, Sweden has its problems. Earlier this month, a teacher in southern Sweden caused a stir by trying to get a group of pupils to change their clothes after they had cross-dressed for a school photo.