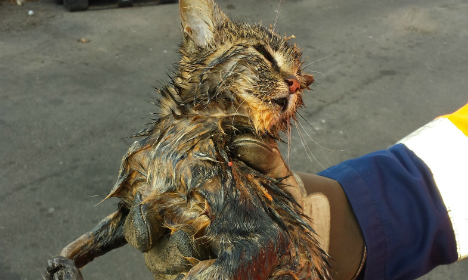 Mercil was just ending his morning shift on Friday when a distressed colleague called him, saying he had heard a weird noise from the back of his truck and needed help. The vehicle was full of food waste and it was impossible for the driver to detect where exactly the tiny cries were coming from.

“There’s like four to five tonnes of waste in there,” Mercil explained to The Local, saying that there was never any doubt in anybody’s mind to come to the animal’s rescue.

“Of course! Who doesn’t love animals?”

The trio decided to meet up at a dump in northern Stockholm where they, after gaining permission from the operators, then slowly emptied the truck on the ground.

“Otherwise it would have headed for the incinerator, and you can just imagine what would have happened,” he said.

“We had a shovel to remove the waste as carefully as we could without doing any harm, and a broom to try to get the kitten out.” Mercil said it took him and his colleagues, Erik and Micke, about 30 minutes to actually get to the cat which they suspect might be wild. It had likely fallen into the vehicle while looking for food in the early hours of Friday.

“When it was free, it just spurted out of the truck, totally covered in grease. It trembled like leaf, it was so scared and tired.”

The men then brought the kitten to a local animal shelter.

“I really hope it gets a good home,”Mercil said, adding he would have been ready to keep the kitten himself if it wasn’t for the fact that he already has two big dogs at home.