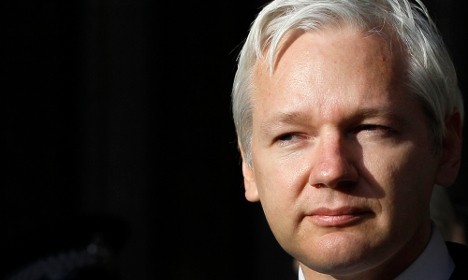 The Assange case on Friday took a new twist as it was revealed that representatives from Sweden’s Justice Ministry will meet with Ecuadorian officials in Stockholm on Monday.

The meeting is aimed at striking a cooperation deal that will essentially allow Swedish prosecutors to question the 44-year-old Australian about rape allegations that were made towards him in 2010. He vehemently denies the claims.

In an emailed response to The Local on Friday, government spokesman Victor Harju confirmed that the talks would take place.

The Swedish Prosecution Authority referred to the Justice Ministry for comments but welcomed indications that the long-running case was moving forward.

“Our goal remains to make sure that an interrogation takes place as soon as possible so of course we welcome a decision,” press spokesperson Robin Simonsson told The Local.

Ecuador has previously said it will only allow a hearing if Swedish authorities can guarantee that Assange will not be handed over to the United States where Assange fears he may face the death penalty if he is charged and convicted in connection with Wikileaks’ dissemination of hundreds of thousands of classified US documents.

Stockholm, meanwhile, has said that such a decision is not for the government to take, but that it is ready to discuss the possibility of applying a multilateral deal in which it would provide legal assistance in crime cases. This means that Stockholm and Quito could potentially cooperate when it comes to both preliminary investigations and potential court cases.

“We do not normally enter into bilateral agreements and encourage states to enter multilateral ones instead,” Justice Ministry spokeswoman Cecilia Riddselius was cited by British daily The Guardian as saying.

“But considering this specific case and our willingness to move the case forward, we are open to discuss this. It will be a general agreement but we hope it will be applicable to the Assange case.”

The decision to commence talks between Sweden and Ecuador comes weeks after some of the claims made against Assange reached their statute of limitations, forcing the main prosecutor, Marianne Ny, to drop part of the investigation.

But the more serious rape claim still remains, with both Ecuadorian and Swedish officials blaming each another for the delay in the case.

The Local has approached Assange's lawyers for a comment.