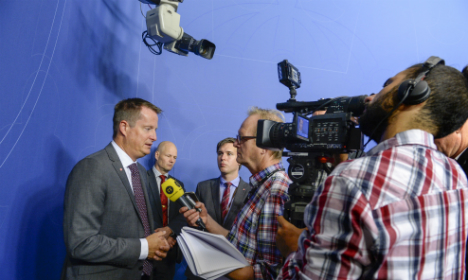 The strategy, presented by Interior Minister Anders Ygeman at a press conference in Stockholm on Friday, is aimed at dissuading and making it more difficult for would-be-terrorists to join radical groups as well as preventing potential terror attacks.

“We have to understand that what happened in Paris and Copenhagen might as well happen here,” the minister said, referring to the January attacks in the French capital which killed 17 people and the February shooting in Denmark that left one person dead.

Among the new measures, which will be proposed to parliament within the next few months, Ygeman said the government wants to toughen the penalties on the possession of grenades and bombs and allow for a smoother task force cooperation over the Nordic borders so that the countries can support each other in the event of an attack or a terror threat.

It will also be easier for different intelligence agencies to exchange information with each other.

Those who decide to join a terror group will also face prosecution upon their return to Sweden. The Swedish security police, SÄPO“ estimates that some 250-300 Swedes have travelled to Iraq and Syria to join radical Islamist groups such as Isis.

To directly or indirectly have contributed to Isis-led killings must have clear consequences.”

In addition, the minister said that authorities will set a limit to how many times a Swedish national can renew his or her passport within a certain time period in a bid to prevent terrorists from using “lost” travel documents. In 2013, almost 60,000 Swedish passports were reported to have been lost or stolen.

Ygeman said authorities will also want to be given the ability to warn civilians via text message to stay away from a specific geographic area and there will be stricter controls when it comes to financing terror operations.