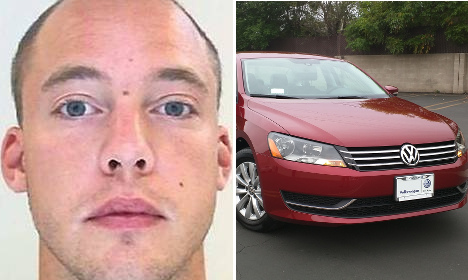 Anton was abducted in a red VW Passat. Photo of car (not involved in incident): Praiselightmedia, via Wikimedia

The police decided to disseminate the man’s picture and ask for the public's help after asking the kidnapped man’s family. The kidnapped 27-year-old man is named Anton and he’s from Alingsås, 50km to the east of Gothenburg.

“We hope it will lead us to get more information so we can find him as soon as possible,” said police reconnaissance leader, Dan Windt.

Windt told Swedish newspaper, Aftonbladet, that the police are working on the basis that Anton is alive.

“It may be that he is hiding somewhere and scared and does not dare to come forward,” says Windt.

Anton was kidnapped on Thursday evening when witnesses said they saw him beaten by three to four other men in a car park before being bundled into a red Passat.

The car was found south of Gothenburg on Friday and is being investigated.

Anton is previously known to police.

“Our working hypothesis is that this man must have had a debt which was unpaid, and that's why he was abducted,” another police spokesperson said.

“It is clear that this investigation is headed in the direction of serious organised crime,” said Windt.

An unnamed source in Swedish newspaper, Expressen, suggested that there may be links to a Hell’s Angel gang.

Police have not commented on whether they believe Sunday's violence to be linked to recent gang crime in Gothenburg, where there have been a number of other high profile shootings in recent months, including an attack outside a restaurant which made global headlines.

Amir Rostami, a leading authority on Sweden's organized crime groups, who is based at Stockholm University, told The Local earlier this year that organized crime remains a persistent problem in Sweden's second largest city, after first emerging in the 1990s.

“Today, the gang environment is…I don't want to exactly call it the Wild West, but something in that direction,” he said.