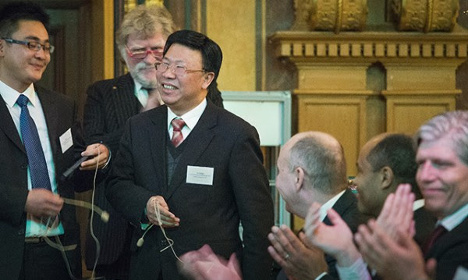 The company has offered to build the railway for 145 billion kronor ($17.11 billion), a significantly lower cost than the 170 billion kronor estimated by the Swedish Transport Administration (Trafikverket).

The firm also says that the railway, which would connect Stockholm with Gothenburg and Malmö, would take just five years to build.

“They claim that they can build the entire Swedish high-speed network in just five years and it's very interesting for us,” the MP Karin Svensson-Smith Chairman of the Parliamentary Committee on Transport told SVT.

“We get to review their claims, but we see that they themselves build their own railways in their own country and in other countries with high-speed.”

The drop in price is down to the fact that the railway would be built on concrete pillars five metres above the ground, a method common in large parts of Asia, especially in China and Japan.

According to railway expert Per Corshammar, there is less financial risk for the state when building railways on bridges whereas railways built on the ground can create long unstable land sections.

Next week the Parliamentary Traffic Committee is set to go to China and Japan to study the countries' railways.

“Half the Committee will travel to Japan and half to China to study the high-speed and efficient movement of trains, and there will be a lot of studies on building on bridges, especially in China,” Karin Svensson-Smith said.