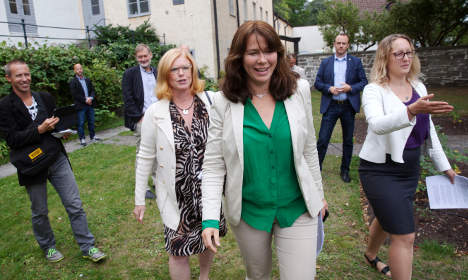 Environment Minister and Green Party leader Åsa Romson announced the decision to protect the Ojnare forest on Gotland, proposing to turn it into a 'Natura 2000' area – a European Union nature protection designation – at a press conference in Visby on Monday,

The announcement looks set to bring to an end a decade-long dispute over controversial proposals to construct a limestone quarry in the area.

Swedish mining company Nordkalk initially applied for permission in 2006 to mine limestone in the area, but work was delayed by a number of legal appeals focusing on potential harm the work might cause to the island's water supplies.

Meanwhile, environmental activists protesting against the mine in a series of high-profile demonstrations claimed that construction of the quarry would damage both the forest as well as ground water reservoirs in the area.

Olov Söderdahl, chairman of an association to preserve the Ojnare forest, said ahead of the press conference on Monday that he would welcome a decision to designate the forest a protected area.

“If it becomes a Natura 2000 area you're not allowed to do whatever you want there, and of course that would be good for us who have been trying to stop this for ten years now,” he told the TT news agency.

Håkan Pihl, project manager at Nordkalk, expressed disappointment after Romson's announcement but said the decision would not immediately put any jobs at risk.

The firm employs around 100 people within its operations on Gotland.

“Layoffs are not currently on the table,” he told TT. Police move protesters from the site in a demonstration in 2012. Photo: Karl Melander/SCANPIX

Monday's decision is a symbolic victory for Romson's Greens, who are the Social Democrats' minority partners in Prime Minister Stefan Löfven's ruling coalition.

READ MORE: Who's who in Swedish politics?

But Romson insisted that the government had been unanimous.

“This is an important issue for the environment,” she told TT, but added: “The government is keen to see limestone mining continue on Gotland. That's why we have also decided to implement a business and industry package of 100 million kronor.”

Björn Jansson, regional Social Democratic chairman of Gotland county, said he was pleased to see the long-running conflict coming to an end and added discussions had begun about how to invest the new industry package.

“We need better infrastructure and transport. We also need to continue to develop Gotland businesses, with small companies. Tourism is also important to us,” he told TT.