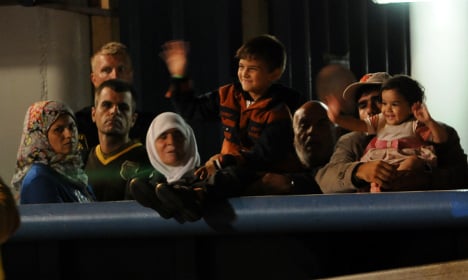 Migrants being taken to the port of Palermo by Poseidon on August 27th. Photo: AP Photo/Alessandro Fucarini

Its last effort saw 572 migrants rescued from a rubber boat off the coast of Libya – but 52 dead bodies were tragically found below deck in a wooden boat.

“Nobody can be part of an operation like this without being affected and touched,” Kenneth Neijnes, head of the Swedish mission, told the TT news wire of his crew on Monday.

The statistics show the extent of the rescue operation. Around 100 crew members participated in the effort during which Poseidon helped rescue a total of 5,295 migrants: 4,330 men, 544 women and 421 children. Fatalities: 53.

But Neijnes emphasizes that they are more than just numbers.

“I wish that everyone could join us and see the situation on the ground. It is easy to speak about migrants and refugees – but they are people.”

One of the refugees he will remember the most is a ten-year-old boy.

“He was so frightened and was on the verge of becoming apathetic. (…) These children are so vulnerable and have experienced things that children should never have to experience,” he says.

“When you're down there you are preoccupied with work but afterwards the thoughts come. What happened to that ten-year-old boy, where did he go? It feels like a sign of poverty if we can't offer protection. If I look around here in Sweden, we have the ability to help.” His staff began the journey home to Gothenburg at noon on Sunday after carrying out a total of 21 rescue operations from June 1st to August 1st. People from around 30 different countries were plucked from the water – mainly from Eritrea, Syria and Sudan.

Neijnes hints that another, bigger, operation could be on the cards, but adds that a government decision would be required to make it happen.

Earlier on Monday the European Union called an emergency meeting of interior and justice ministers in Brussels on September 14th to find measures to cope with escalating migration following a joint call for action by several nations.

The number of migrants reaching the EU's borders reached nearly 340,000 during the first seven months of the year, up from 123,500 during the same period in 2014, according to the bloc's border agency Frontex.

At least 2,300 migrants have died at sea since January during attempts to reach Europe, almost invariably on overcrowded boats chartered by people smugglers.