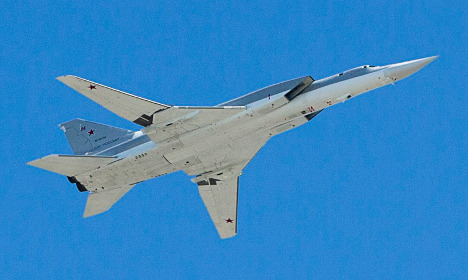 A picture of a Russian TU-22 jet taken at another occasion. Photo: AP Photo/Pavel Golovkin

The Russian planes flew above southern parts of the Baltic Sea and east of Gotland.

A military spokesman told The Local that the planes had stayed in international airspace and that the Swedish air force had followed them only to inspect them more closely.

“We are up there looking at things that are going on in our surroundings. It was not a violation of our airspace but we thought the planes looked like they could be of interest to us,” said press secretary Jesper Tengroth of the Swedish Armed Forces.

He confirmed that other countries also observed the Russian planes, but would not specify their nationalities and declined to comment further.

Several Swedish Jas Gripen jets are currently involved in an annual military exercise taking place across Sweden until Tuesday. The exercise is designed to “train the air force's ability to defend Sweden in a high-conflict scenario”.

Just hours before Monday's incident, Sweden's Defence Minister Peter Hultqvist called for strengthened military cooperation with the United States amid concerns of Russia stepping up its presence in the Baltic region.

“We are now seeing that Russia's military activity in the area is increasing, both in terms of scope and content. It is about controlling and boosting units' deployability. The Russian exercises are being carried out across Russia including in the Arctic and Kaliningrad,” he wrote in the Dagens Nyheter newspaper.

The past year has been one of heightened tensions between Sweden and its eastern neighbour, riddled with spy allegations, submarine hunts and claims Russia rehearsed a military invasion of Gotland, strategically located in the middle of the Baltic Sea, back in March.

READ ALSO: What do people on Gotland think of Russia?

Increased Russian military activity has caused jitters in Sweden, prompting Hultqvist to announce that Sweden would be stepping up its military power, including stationing 230 Swedish troops on Gotland from 2018 in a bid that would effectively make the island Sweden's first line of defence to the east.

“I think that there is a new security situation in the Baltic area and in the Baltic Sea,” Hultqvist told The Local on the day the sighting was confirmed.