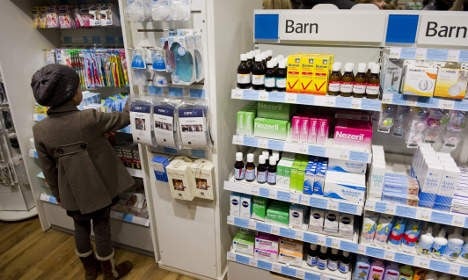 “I brought a small box of heart-coloured plasters to Margot,” Jensen was quoted as saying by the paper.

The quarrel, known as “plastergate” in the Danish press, dates back to mid-August when Jensen posted a link to an article about Swedish pharmacies introducing a range of dark-coloured plaster on Facebook alongside the comment: “I’m once again happy that I don’t live in Sweden….”

Pharmacy giant Apoteket's decision to introduce the plasters followed criticism by Swedish blogger Paula Dahlberg who told public broadcaster Sveriges Radio in August that the company was contributing to racism by only offering shades of beige plasters on its shelves.

“The fact she said that demonstrates that there are heated discussions about immigrants and refugees right now,” Communications Director Eva Fernvall told The Local at the time, adding that the national chemist chain was committed to reducing discrimination.

But the decision caused a massive stir in Denmark, with the Danish minister for children’s affairs and education, Ellen Trane Nørby, also weighing in on the issue, comparing it to Sweden’s recent censoring of ‘racist’ elements of Pippi Longstocking stories.

Her and Jensen's comments caused a media storm and the news quickly made it into the Swedish press with several high profile critics calling on Jensen to apologize.

READ MORE: Dark Swedish plasters cause a stir in Denmark

Sweden's own foreign minister Margot Wallström attempted to put a bandaid over the latest row by suggesting that Jensen had crossed a line, but noting that the 44-year-old had simply made his plaster-related blunder as a result of inexperience.

“I'm thinking that he is new to the job as foreign minister. You have to forgive those kinds of transgressions. I am sure he will learn,” Wallström told the TT newswire at the time.

Jensen also defended himself on Danish channel TV2, explaining that his comments were supposed to be “tongue in cheek” but adding: “I'm happy to live in a country where we debate more important things than the colours of a plaster.”

Commenting on his choice of present on Monday, Jensen said: “I hope that we can draw a humouristic line under it. There’s obviously not so much space for humour in foreign policy.”

“It was an attempt to make a tongue-in-cheek comment on a Danish debate. Sometimes it is hard to see the irony in the written word. It's a lot easier when you speak directly [with someone].”

Wallström was not available for comment when contacted by The Local.