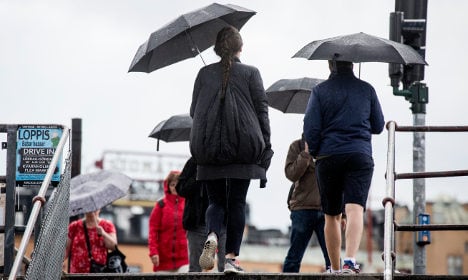 Swedish weather institute issued a class-1 (the lowest kind) warning for heavy rain in the south-west of Sweden on Tuesday.

Some 30-50 millimetres of the wet stuff was expected to fall in the area before moving north across central and northern Sweden on Wednesday and Thursday, said public broadcaster SVT's meteorologist Ingrid Nenkert.

“It started [on Monday] afternoon and it is set to continue. (…) [Then] at the end of the week the weather will be sloppy: sunshine in some places and some showers but no heavy rain,” she added.

FORECAST: The weather in your parts of Sweden

The forecast is essentially a reflection of this year's Swedish summer which offered temperatures ranging from below zero to more than 30 degrees, and everything from thunderstorms, heavy wind and rain to gorgeous sunshine.

“The summer does not stand out as either very cold or very wet,” SMHI meteorologist Marcus Sjöstedt told Swedish news agency TT.

Some areas, however, may not be quick to agree. For example residents of the town of Hjo in central Sweden, where 58.4 millimetres of rain fell in less than 24 hours on July 29th – a record for the summer.

Or any tourists in Tarfala in Sweden's mountainous north who felt the mercury drop to -5.1C on June 15th.

“It was very wet in June and July and the low pressure fronts ruled. This meant a whole lot of precipitation and temperatures below average in many areas,” explained Sjöstedt.

Meanwhile, at the end of August a heatwave sweeping in across Sweden prompted authorities to issue a warning of forest fires as well as a total ban on lighting fires in some areas – including advising people not to throw even a privately held barbecue.

The main characteristic of summer 2015 has been its varying nature, according to Sjöstedt, who says it is therefore difficult to talk about average temperatures.

“It would be strange, because on the one hand it's generally been a degree or so below normal in June and July, on the other hand a degree or two above normal in August – while there are areas where temperatures have been what they normally are.”