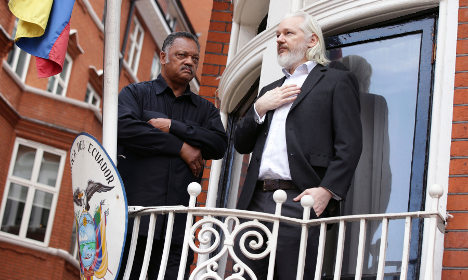 Julian Assange with US pastor Jesse Jackson on the balcony of Ecuador's London embassy. Photo: Yui Mok/PA via AP

Swedish and Ecuadorian officials met in Stockholm for the first time on Monday to hammer out a general agreement for judicial cooperation between the two countries.

“We hope to have an agreement soon (…) we hope to have it well before Christmas,” Swedish justice ministry official Cecilia Riddselius told the AFP news agency.

She stressed the agreement was not specifically linked to the Assange case.

“This is a general agreement about judicial help in criminal cases that will allow authorities in the respective countries to help each other,” she said.

Ecuador has demanded that such an agreement be in place before it will let Swedish prosecutors interview Assange, who has been holed up at its London embassy since 2012.

Swedish prosecutors offered in March to question Assange in London, dropping their previous demand that he come to Sweden to answer to the 2010 allegations.

The offer was seen as providing the potential for a breakthrough in the case, which has been deadlocked for nearly five years.

But Ecuador refused to allow such a meeting until a bilateral judicial agreement was in place.

TIMELINE: Twists and turns of the Julian Assange case

Assange, who faces arrest if he tries to leave the embassy, denies the allegations and insists the sexual encounters were consensual.

The 44-year-old Australian fears that if he leaves he could eventually face extradition to the United States and a trial over the leak of hundreds of thousands of classified military and diplomatic documents in 2010.