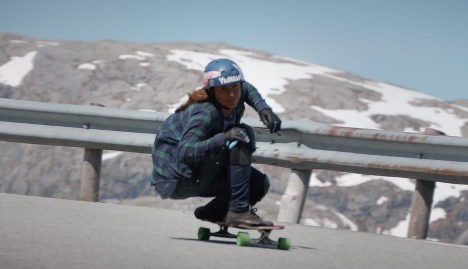 The short film, set to music by Swedish rock band Tussilago, features the Swedish longboarder Ishtar Bäcklund and her fellow riders careering down the Norwegian mountains, and occasionally falling.

Stockholm filmmaker Maceo Frost said he had aimed to do more than simply make a cool skateboarding film.

“The film is a glimpse into the profound feeling of believing in yourself and living one’s greatest dreams,” he writes.

In the film, Bäcklund is shown expounding on her dreams.

“One day I'm going to travel the world.I'm gonna do everything. I just wanted to see the world and learn,” she says. “You should do what you believe in. Just follow that feeling. Everything else is a lie.”

“We are used to hearing, that you can't just dream all the time. You know, that old way of thinking. And it's not true anymore because we just keep proving it wrong by succeeding in what we believe in.”