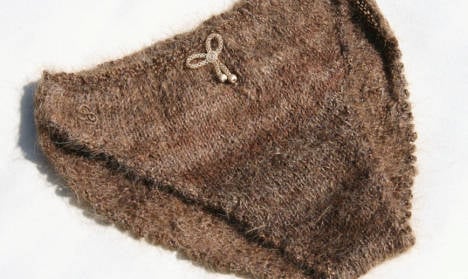 The hairy knickers. Photo: Private
The hairy underwear is currently on display at Konsthantverkarna, an art museum in Örebro in central Sweden, which is currently showcasing the unusual work of Nina Sparr.
The 44-year-old says that using hair to make clothes and crafts has been the lifeblood of five generations of her family.
“This is not a hobby, it is my professional work,” Sparr tells The Local on Wednesday.
“In the old days the people in my small village, Våmhus in Dalarna, used to travel around selling the hair. They used to make socks to keep men out in the forest very warm and dry. My family travelled all the way to Russia and Finland. They were poor and so it was a way to make money,” she explains.
“Now I use the same techniques for my art. I chose to make the pants because it's fun to make something unusual that you don't expect you can make out of hair.”
Made from thousands of donated strands of human hair that are each 40 centimetres long, the unusual knickers form part of a display at Konsthantsverkarna by Sparr that also includes a hairy princess crown, a vest and jewellery made by Sparr. Swedish craftswoman Nina Sparr who made the pants. Photo: Private
The Swedish artist says she has been shocked to see so many people sharing photos and articles about her work this week.
“I didn't plan this. I am the kind of person who leads with my heart and I made these [pants] because working with hair is a passion for me. Hair is a very personal thing, so it is interesting to work with.”
Despite describing her handywork as art, Sparr admits that she did allow one journalist to try on the underpants over her own and says that the reporter fed back that the clothing was “rather itchy”.
“Well, they are not really supposed to be worn. They would be scratchy, like that feeling you get when you go to the hairdressers and the freshly cut hair falls on to your neck,” she says.
As for continuing the family tradition, she says that her two-year-old daughter has kept a beady eye on her creations and seems to understand the importance of her craft.
“She says a few words together like 'mummy…hair…work!' and so she is paying attention,” Sparr laughs.
“But I won't put any pressure on her. It has to be her decision. That was my mother's approach and so I will do the same thing. But I am hopeful!”
Sparr's work is set to remain on display at Konsthantverkarna until September 23rd.