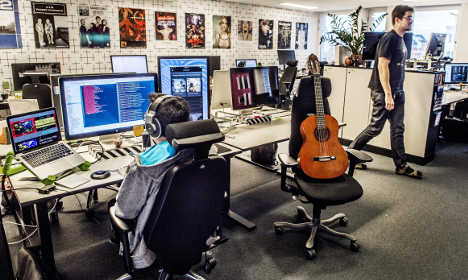 Sweden is home to many of the world's successful startups, such as Spotify. Photo: Lars Pehrson/TT

Startups have long argued that they struggle to attract key workers because of Sweden's comparatively high taxes on employee stock options which are used to pay staff in early days when cash is tight.

“Small startups which take big risks, which could go bust within a couple of years, need to be able to recruit good people. If you want to recruit someone from Ericsson or somewhere who has a high salary and you’re asking them to take a big risk and a pay cut, they need to get something else. They need to be able to share in the success if it goes well,” Mathias Sundin, who represents the Liberal Party – one of the four centre-right parties that make up Sweden's opposition Alliance group – told The Local on Wednesday.

However, profits from the stock options are currently taxed highly in Sweden, at a rate of 68 percent. This puts the Nordic nation miles behind the Silicon Valley-style location that many want Stockholm want to be; the corresponding figure from the US start-up hub is 15 percent.

But on Wednesday, Enterprise and Innovation Minister Mikael Damberg of the ruling Social Democrat-Green coalition spoke at Stockholm Tech Fest 2015 on and announced a government inquiry to review Sweden's strategy – which could potentially see the fees cut after its findings are presented in March next year.

“This is one of the first questions that companies raise with me today, as they don't have enough money to pay very talented people the salaries they need,” Damberg told The Local just after his presentation.

”But it shouldn't open up for some sort of tax planning, where people don't pay tax. The start-up scene has to pay its share of tax,” he added. Mathias Sundin, who sparked global headlines when he ran for parliament in September using only Bitcoin to fund his campaign, said welcomed Damberg's plans but added that they were too vague. He advocates taxing options schemes as capital gains at 25 percent and told The Local he would have liked to see concrete proposals to that effect.

”It would have been very much better if he had [said] 'we're going to do something about this. We'll sort this.' [Damberg's statement] is a good signal, but not more than that,” he said.

Damberg's comments come on the final day of Stockholm Tech Fest 2015 where hundreds of startups have gathered to discuss investment strategies and technology over the course of two days.

Stockholm is home to seven of the world's 78 start-up firms valued at more than one billion dollars. But a severe housing shortage in the capital is making it increasingly difficult for many companies to recruit international talent – simply because they have nowhere to live.

“It's a really difficult situation, as we have a housing crisis in Sweden and have had for several years, as not enough has been built in Stockholm. My long-term answer is that we need to get house-building to increase. There's no other easy answer,” said Damberg.

”But in the short term people just wing it. You try to find friends and live together or you work with your company to find some kind of arrangement where you buy an apartment together. But it's very complicated.”