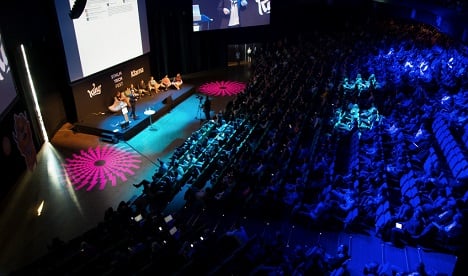 The founders of Spotify, Skype, Klarna, and more were onstage at Sthlm Tech Fest this week, where people from around the world came to celebrate the startup capital and discuss the future of tech.

It's no coincidence that the event takes place in the capital of Scandinavia. After Silicon Valley, Stockholm is the top tech hub in the world judged by number of billion-dollar startups (unicorns) per capita.

The first Stockholm Tech Fest took place in 2014, and was attended by more than 3,000 people, including many startups and investors.

Stockholm Tech Fest was arranged by Tyler Crowley, an American tech guru from LA who has now made Stockholm his home.

Finance was one of the hottest topics at the event, as panelists got into a heated debate about the future of banking.

American mobile bank startup Card.com was present on stage to argue that banks should not be trusted, prompting audience members to stop giving their money for free to the organizations and instead put it unto a free service – or even keep money under their pillows.

Many panelists were unimpressed with the rough rhetoric, which included “let's eat the bankers” and “stop working with those jerks”. The moderator aptly pointed out that while American banks have become notorious after the Wall Street Crisis, Swedish banks are not necessarily as “bad”.

Nevertheless, finance and banking continued in the spotlight. Financial tech, dubbed 'fintech', is one of Sweden's – and Stockholm's – fastest growing sectors.

But what is FinTech really?

In a recent report from the Stockholm School of Economics, it has been described this way:

As it happens, Stockholm is one of the EU’s biggest hubs for Fintech investments, and it is the city in Europe that has attracted the second most investments over the last five years.

A new report on Fintech shows Stockholm as a solid no 2 in Europe the past 5 years #sthlmtech #fintech http://t.co/XKwGORP7sr

The country has a rich history in financial technology innovations, from installing the world’s first online ATM in 1968 to pioneering internet banking in the mid-1990s, just as the internet itself was taking off.

A new startup on the FinTech scene is Dreams, an upcoming app which presented itself at Tech Fest as a fun and social way to save up towards certain goals.

And as the digital Financial Tech sector rises, cash in Sweden is falling, quickly. Many have argued that Sweden is close to being a cashless society, and no one minds.

What do you think? Is a cashless society a good thing or a bad thing?