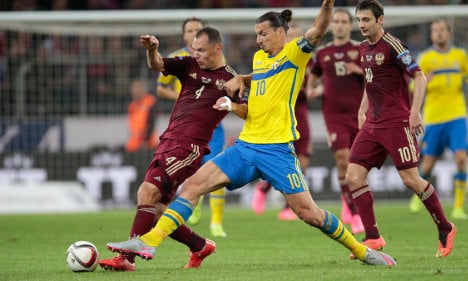 Zlatan was sidelined at the interval with a leg injury. Photo: TT
New Russia coach Leonid Slutsky took over last month following the sacking of Italian Fabio Capello  and a first-half Artem Dzyuba goal set Russia on their way to a hard-fought win in Moscow.
Russia stay third in Group G but closed the gap on second-placed Sweden to  one point, with leaders Austria playing Moldova later on Saturday.
“It was a very important match,” Slutsky said. “Now we need to win all of  the remaining matches and wait for our rivals to slip up.
“We were very good in the first half and we could have avoided a nervous ending if we had converted more of our chances.”
Russia, spurred on by a capacity 45,000 home crowd at the Otkrytie Arena, started in lively fashion and in the eighth minute Spartak Moscow midfielder Roman Shirokov had the ball in the net only to be denied by the offside flag.
The home team dominated and in the 38th minute Shirokov back-heeled the  ball into the area to Igor Smolnikov, who found the unmarked Dzyuba near the penalty spot and the Zenit St Petersburg man kept his cool to score.
Sweden lost skipper Zlatan Ibrahimovic to injury at the interval, with coach Erik Hamren sending on Ola Toivonen in place of the Paris Saint-Germain striker.
Nevertheless, the visitors started to get into the game, pinning Russia back, and in the 62nd minute Toivonen had a clear chance to level but Russia 'keeper Igor Akinfeev parried his powerful close-range shot.
Russia looked visibly tired late in the game but the Swedes failed to take advantage of their superior fitness.
Emil Forsberg missed Sweden's last chance in stoppage time as his powerful low attempt from the edge of the area was cleared by Akinfeev for a corner.
“We were not surprised by Russia's performance,” said Hamren, who is hopeful Ibrahimovic will be back in time to face Austria at home on Tuesday.
“I had to substitute Zlatan at the interval as he felt pain in his leg.
Hopefully he will be able to play against Austria.”
Meanwhile, Ibrahimovic said he believed his team deserved at least a draw in Moscow.
“I have no idea what happened to me late in the first half,” Ibrahimovic said. “I just felt a sharp pain in my leg and asked to be substituted. It seems strange but Sweden played even better without me.
“We dominated the play after the break and should have scored. I think we deserved a draw today.”