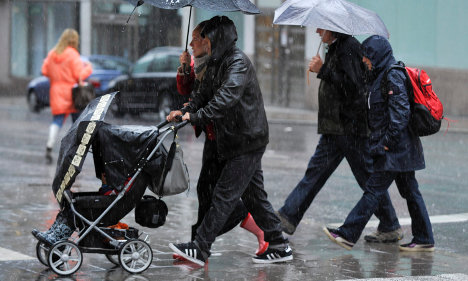 Stockholmers in a very wet capital. File photo: TT
Weather agency SMHI issued 13 class-1 warnings for wet  and windy weather on Sunday as storms spread eastwards across the country.
Stockholm county was specifically singled out, with the agency noting that it and several nearby counties could expect up to 50 mm of rainfall on Sunday.
The morning saw over 100 homes evacuated in Hallsberg, near Örebro in central Sweden, with emergency services noting that water levels inside some people's houses had reached “around a metre” in depth.
Pictures in Swedish media have shown people travelling down residential roads in canoes, or wading waist deep.
Train traffic between Hallsberg and Laxå ground to a halt too, leaving rail and road traffic between Gothenburg and Stockholm delayed. Firemen in Mariefred, near Stockholm, on Sunday where many roads were closed. Photo: TT
Many areas in central Sweden were hit hard too, with Hjortkvarn recording 97 mm of rain over a 24-hour period, noted SMHI on Sunday morning.
In Kumla, central Sweden, one resident was no doubt left in panic after getting stuck in a flooding elevator.
Local emergency services rescued the Swede, telling the TT news agency that the situation was “terribly unnerving”.
Meanwhile, around 50 cellars so far have been reported to have flooded, with Stockholm emergency crews also contacted about flooding homes.
Up north, the weather is even wilder, with Låktatjåkko mountain station near Björkliden in Swedish Lapland reporting the season's first snowfall on Friday.