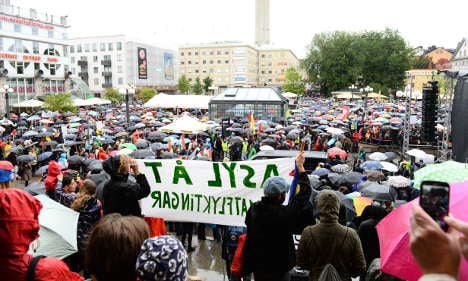 Thousands showed up for the Stockholm rally on Sunday. Photo: TT
Thousands of umbrella-holding Stockholmers braved heavy rain on Sunday afternoon to take part in a rally in support of refugees, an idea inspired by similar demonstrations in Germany and Austria last month.

Prime Minister Stefan Löfven gave a rousing speech in which he urged Swedes and Europeans to do their part to help out.
“We need to decide right now what kind of Europe we are going to be. My Europe takes in refugees. My Europe doesn't build walls,” he said. Prime Minister Löfven speaks to the crowd. Photo: TT
Löfven added that Sweden must “continue to take its responsibility” and that “all of Europe needs to do more”.
“Today is not the day to point fingers, it's the time to find solutions. This is the Sweden that I lead, and this is the Sweden I love,” he concluded.

“It's cold and wet but it's warm inside” says Anders Lindh, 20, pointing to his heart #refugeeswelcome #Stockholm pic.twitter.com/QEne8Z0xLK

Over 30,000 people registered their support on Facebook for the ‘Refugees Welcome’ demonstration, which took place at Medborgarplatsen, a square in Södermalm.
Media estimates suggested that around half of that figure attended the event, but organisers said they still considered it a triumph given the poor weather.
It's perhaps no surprise that Stockholmers were so keen to show their support – an opinion poll published on Sunday in the Aftonbladet newspaper showed that a majority of Swedes are supportive of refugees.
When 1,200 people were asked on Friday if they were prepared to help out refugees, two in three said yes, with 54 percent responding “yes, absolutely”. Respondents defined help mostly as donating clothes or money. Less than 15 percent said they didn't want to help at all.
“It's very important to show what the public opinion is,” one demonstrator at the rally, Arizo, 32, told The Local.
“We are a progressive people, we are tolerant and we don't want to just stand by and watch people dying in the Mediterranean, to protect our borders,” she added. The event was supported by numerous charities including Rädda Barnens Ungdomsförbund (Save the Children’s youth wing), Ungdom mot rasism Stockholm (Young people against racism in Stockholm) and Röda Korsets Ungdomsförbund (the youth arm of the Red Cross in Sweden).

Elisabeth Dahlin (pictured below), Secretary General of Rädda Barn, was another speaker at the rally. Elisabeth Dahlin at the rally on Sunday. Photo: The Local
In an interview with The Local just ahead of the demonstration Dahlin said:
“This issue has become much more visible over the past seven or eight days. People realise that this is something happening on our own shores and I really think the wind has changed. This is the top issue that people are discussing at work and around the kitchen table.”

Police and media starting to arrive for #refugeeswelcome rally which starts at 4pm #thelocalsweden #jagdelar pic.twitter.com/cRxm9J8lCq

“I will talk a lot about the fact that Europe has to live up to its standards. It’s supposed to be based on human rights and solidarity. Yet in a place where there are 500 million people the countries can’t agree on how 66,000 people should be given safety.”
The rally was also supported by youth wings of political groups from across the spectrum, with young Feminist Initiative and Left Party supporters joining members of all of Sweden’s major centre-right Alliance parties.
Hanna Cederin, head of the Left's youth movement told The Local that she was at the march to push for action from Sweden's government.
“It can't just stay symbolic…we can't just say the words, we need to act as well,” she said.

The Stockholm rally was organised before images of a dead Syrian child washed up on a Turkish beach sparked debate around the world on Thursday, but gained momentum in the wake of international discussions about the photos.

READ ALSO: 'Sweden was right, the UK should be ashamed' Aylan Kurdi, 3, was found dead on a beach in Turkey. Photo: Uncredited/TT

Sweden currently takes in more asylum seekers per capita than any other EU nation. But while many Swedes have rushed to show their support for refugees in recent days, the nationalist Sweden Democrat party, which backs slashing immigration, is growing in popularity. Polls suggested last month that it is now supported by at least 18 percent of voters, in contrast to the 12.9 percent it polled a year ago in the last general election.