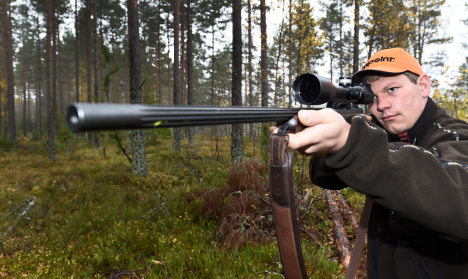 A hunter in northern Sweden on the first day of the annual elk hunt. Photo: TT
There was “immediate action” as the annual elk hunt was launched in Norrbotten on Monday, Expressen newspaper reported, with two animals killed in quick succession.
The pair were killed by a 60-member strong hunting group, including 24-year-old Jessica Gard.
“There's an expectant mood – it's so exciting that the hunting season has finally begun,” she told the paper.
“I'm hoping – and I believe – that I will shoot an elk during this year's hunt.”
Norrbotten county in far northern Sweden is allowed one of the largest culling efforts in Sweden, with authorities setting the total figure of elk to be killed in the area at 15,530 this year. A hunter in northern Sweden on the first day of the annual elk hunt. Photo: TT
This compares with 14,000 in Jämtland, 11,635 in Västerbotten, 6,443 in Dalarna, 6,092 in Gävleborg, 4,225 in Värmland, and 4,000 in Västernorrland.
While the hunt kicked off on Monday for those in the north, hunters in southern Sweden will have to wait until October 12th before taking to the forests.
There will be an estimated 300,000 Swedes involved with the hunts, which are allowed to continue into early next year.
Hunting association Jägarförbundet has encouraged hunters to keep an eye out for raccoon dogs, which are spreading in Sweden from Finland where they are already established.