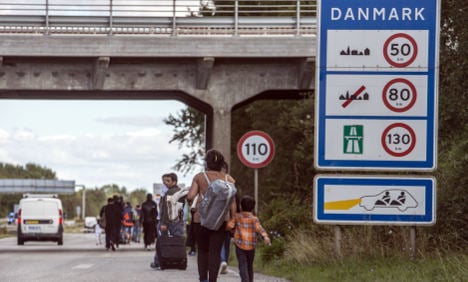 After a short-lived march toward Sweden, most of the refugees have now returned to Rødby. Photo: Per Rasmusson/TT/AP
The first 29 kilometres (18 miles) of the road from Rødby harbour in southern Denmark which leads towards Copenhagen was closed on Monday night.
“This is being done for the safety of the people who are walking along the motorway,” local police said in a statement.
But the road was re-opened in the very early hours of Tuesday morning after most of the refugees turned back, having agreed to be taken to police stations to register for asylum in Denmark.
The refugees were among 300 people who landed on Sunday in Rødby, a port town on the island of Lolland which hosts Scandinavia's busiest ferry link to and from Germany.
Some of the group had earlier ran away from police at the town's train station, to avoid having their fingerprints taken in fear they would be registered as seeking refuge in Denmark and unable to go on to Sweden, where many said they had family.
Many of those walking on the motorway had raised their hands as they headed north, shouting the name of the biggest city in southern Sweden: “Malmö, Malmö, Malmö”.
Laila Saied, an engineer from Syria, said she had travelled through Europe with her husband and two children for one month in the hope of reaching Sweden.
“I slept on the street, I was on the sea with my children,” she told Danish broadcaster TV 2 News. Some of the migrants who started walking towards Sweden. Photo: TT
The distance from Rødby to the Öresund bridge which links Copenhagen with Malmö in Sweden is 180 kilometres.
Swedish officials reported on Tuesday morning that 230 refugees had made it to the southern city of Malmö over the past 24 hours, although authorities suggested it was unlikely that any of those had made the long journey on foot.
“Many of them are absolutely exhausted. But everything is fine now, they've got a place to sleep and a roof over their heads,” a worker at the local migration board (Migrationsverket) told the TT news agency in Sweden.
Kim Kliver, a spokesperson for the South Zealand and Lolland-Falster Police, said he suspected that some Danes had driven some of the migrants north.
“That's perhaps what has occurred, despite our warnings that it is actually illegal,” he told news agency Ritzau.
READ ALSO: Asylum seeker says 'the long wait is making people crazy' Some of the migrants who started walking towards Sweden. Photo: TT
Danish Prime Minister Lars Løkke Rasmussen said at a press conference on Monday that around 400 refugees had entered Denmark since Sunday, but doubled that number to 800 a few hours later.
Swedish news agency TT put the figure at 1150 on Tuesday morning and suggested that 300 were unaccounted for, in other words, authorities were unsure where they had ended up.
See also: Hundreds of refugees 'disappear' in Denmark
“We cannot just ignore our obligations and send them to Sweden without its consent, because then we would be doing the same as many other countries, which is the reason the European asylum system is under massive pressure,” said Rasmusson.
The Danish leader said he had told German Chancellor Angela Merkel that Denmark was willing to accept 100 refugees from Germany “given the very special situation Germany and Europe is in.”
While Sweden has become a top EU destination for refugees by issuing permanent residency to all Syrian asylum seekers, Denmark has sought to reduce the influx by issuing temporary residence permits, delaying family reunifications and slashing benefits for newly arrived immigrants.