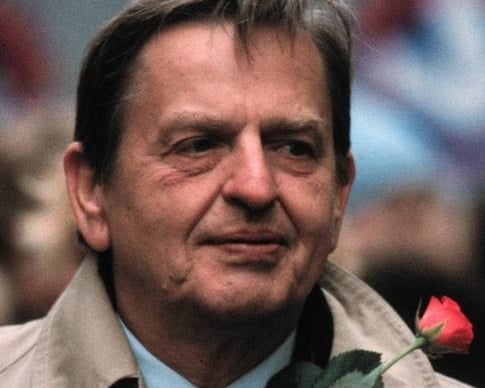 One fateful evening, February 28th, 1986, gun shots were heard in Stockholm. The Swedish prime minister was gunned down while walking home after watching a film in a theatre. But who exactly was this man, and how does his philosophy live on in Sweden and Europe – especially with the migrant crisis facing Europe today?

Olof Palme, a little boy from Stockholm who attended college in the United States, grew up to become the most polarising figure in Swedish politics, who often found himself in conflict with fellow leaders in big western powers. Olof Palme was unlike any other western leader of our time: he never choose the comfort of remaining silent, but always criticized great powers on the foreign policy choices that affected the lives of many people in poor countries.

At the time when Margaret Thatcher, the former British prime minister, was calling Nelson Mandela a terrorist, Olof Palme was speaking against the Apartheid system in South Africa and in fact provided funds from the Swedish tax payers to help the African National Congress (ANC) fight the apartheid regime in South Africa. At this same time, ANC was listed as a terrorist group by many western powers.

Some people have speculated that Palme was gunned down by mercenaries hired by the apartheid government in South Africa. He spoke against the Russian invasion of Czechoslovakia, the US war in Vietnam and famously compared it to the Nazi Treblinka extermination camp, which led to US suspension of diplomatic relations with Sweden. The Vietnam War had led to immense suffering of ordinary people due to US indiscriminate bombings. Palme spoke against war and brutal dictatorships. He said, “People are being tormented, a nation is being tormented into submission…their violence has triumphed but the judgement of history has condemned the perpetrators.”

This, and other policies of his, put his life in increased danger. He ardently urged world powers to do more on helping refugees in conflict areas. Palme always maintained a policy of openness to refugees. His mother had come to Sweden as a refugee from Latvia during the First World War.

Palme put Sweden at the forefront of progressive support for humanitarian movements, he could not afford to see a single person suffer. He once said, “My political philosophy is formed by working for dignity for all human beings”.

I am sure he would have been broken-hearted by the Images of Aylan Kurdi, a Syrian boy whose body was washed up on the Turkish beach after drowning with his family trying to reach Greece. Palme, despite criticism from the right wing, was instrumental in shaping Sweden’s progressive culture and friendly policy to refugees. In fact, Sweden has been at the forefront of helping Syrian refugees since the war broke out, even declaring automatic asylum for all Syrian refugees.

I was forced to write this article because of the rhetoric I have been hearing since the refugee crisis started.

British Prime Minister David Cameron called refugees a “Swarm”. The last time I checked the English dictionary, swarm means a “large number of insects or other small organisms, especially when in motion”. The Hungarian prime minister said he did not want to let too “many” Muslim refugees into his country.

It made me ask myself – where are the Olof Palme’s of our time? Men who don’t care about criticism but who do the right thing. It’s our responsibility to help others in need.

With the exception of Germany and Sweden, until recently, many countries have done so little to help the Syrian refugees – especially the rich Gulf States of Qatar, Saudi Arabia, Iran, Oman and Bahrain. Every time we have had a humanitarian tragedy like the Holocaust of the Jews, Genocide in Rwanda and Armenia, we have always promised to do more – but we have again and again let down our fellow human beings.

Helping refugees is not the final solution; we should also find a solution to the root causes of these senseless wars that have led to so much suffering.

But while we try to find these solutions, we ought to reach out and help those in dire need. We don’t need to wait for a body of a boy to wash up on a beach to start doing what we ought to do as humans.

And furthermore, powerful states are accomplices in many wars that should have been avoided. The war going on Ukraine could have been avoided if it wasn’t for Russia’s aggression. The war in Syria is one of the offspring of the mayhem set in motion by the US invasion of the Middle East, which increased guns in the region.

I wonder when, as a species, we will ever overcome war as a means of political solution.

I wish we could have more men like Olof Palme: men who don’t sit on the sidelines while people are dying, men who would speak out against war even when it is not comfortable to do so, and men who would do more than just name-calling to help people who are suffering.

Wouldn’t the world be a safer place?

My suggestion:Olof Palme deserves a noble peace prize. I would also suggest the SI scholarships (category one) be renamed Olof Palme Scholarships for Developing Countries.