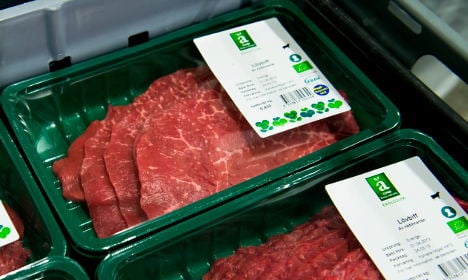 The price for a kilo of meet has shot up 29 percent compared to last year. Photo: AFP
Farmers are selling their beef at a rate that's 29 percent higher than it was one year ago, statistics from Sweden's board of agriculture Jordbruksverket have shown.
This means their price has raised from an average of 31.78 kronor ($3.78) per kilo to 40.95, reported the ATL newspaper.
The paper noted that prices in the EU had also gone up, but not to the same extent as in Sweden.
And farmers in the industry have enjoyed an overall healthy demand from customers.
“Many people want to have Swedish meat,” Jan Forssell, the head of the Swedish beef-producing association SNP, told the TT news agency.
“This is something that has been going on for several years, but it's only during the last year that it has properly taken off.”
He added that the reason was “probably” that “people feel safe with Swedish meat”, especially considering fears of some meat products containing antibiotics.
While Forssell said that he hoped the demand could lead to an increase in production, he explained that he was worried that the situation with dairy farmers was a bad sign.
“The milk crisis means there are fewer cows and we're in need of calving cows. If you want to have more Swedish meat in the future then you should choose to buy Swedish milk,” he said.