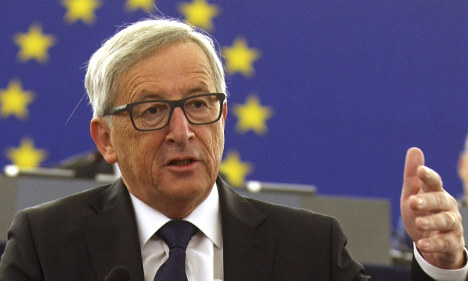 The President of the European Commission Jean-Claude Juncker speaking on Wednesday. Photo: TT
European Commission President Jean-Claude Juncker gave an impassioned defence of the European Union and European values in his first annual European State of the Union address on Wednesday.
Speaking in a packed European Parliament in Strasbourg, Juncker wasted no time in addressing Europe’s refugee crisis, a topic which many had touted would be the focus of the morning’s proceedings.
Calling for solidarity, he said European countries should on a “compulsory basis” resettle 160,000 refugees, confirming a figure that had become public earlier in the week.
“Now is not the time to be frightened, it is time for bold, determined action for the European Union,” he said.
Reminding listeners that Europe’s history is “marked by millions of Europeans fleeing from religious or political persecution”, he also put the scale of the current crisis in perspective, noting that asylum seekers only make up 0.11 percent of the European population. That figure was 25 percent in Lebanon, he noted.
The Commission President also stressed it was unacceptable for countries to accept asylum seekers on the basis of religion — a statement met with applause.
While asylum seekers generally enter Europe through Greece and Italy, nearly half of all asylum requests in 2014 were presented in Germany and Sweden.
Junker's keynote speech came a day after the two northern neighbours held a press conference in Berlin focussing on the need for other European countries to share responsibility for new arrivals.
Sweden's Prime Minister Stefan Löfven told reporters: “We have agreed to continue to push for a reformed European refugee policy. All countries must take full responsibility to help people who have been displaced”.

Sweden's Prime Minister Stefan Löfven and Germany's Chancellor Angela Merkel. Photo: TT
During Wednesday's speech, Juncker said Europe also needed to create a list of safe countries — chiefly Balkan states, but also Turkey — a move that Löfven has also vocally supported in recent days.
Junker described this as a “procedural” issue, helping EU countries to prioritize refugees from Syria, rather than a move that would override the Geneva Convention on refugees.
READ ALSO: Denmark rejects calls for refugee quotas
While Sweden has already pledged its support to Juncker, nearby Denmark – which is currently deporting many refugees arriving from Germany and also stopping some from moving north to Sweden– was quick to reject the new quota suggestion.
Denmark has an opt-out on EU Justice and Home Affairs issues, which makes it exempt from having to participate in a shared European approach to the current refugee crisis
A spokesperson for the country's ruling Venstre (Liberal) party Jakob Ellemann-Jensen told newspaper Jyllands-Posten shortly after Juncker’s address:
“Of course Denmark should participate in the solution but we have an opt-out [on EU Justice and Home Affairs, ed.], we stand outside of the joint asylum and immigration policies and Danish asylum rules shall continue to be determined in Denmark.”
Ellemann-Jensen said that the government’s opinion on quotas remains “unchanged” and Denmark will not accept “dictated quotas from either Brussels or Stockholm”.
He did, however, open up the possibility that Denmark might volunteer to take additional refugees after EU ministers meet in Brussels on Monday.
“We'll have to look at it on Monday. One expects that there will be a draft of how the distribution should be. And if from the Danish side, we find it reasonable than we can decide how many we wish to take,” Ellemann-Jensen told Politiken.