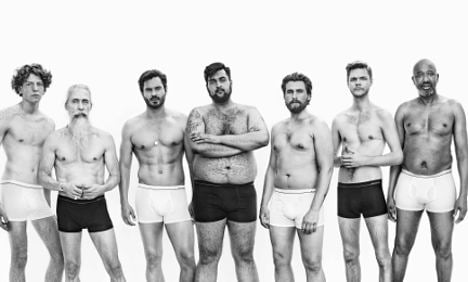 Scandinavia may have a reputation for boasting some of the most good looking people on the planet, but it seems that while many Nordic men might look like tough Vikings, plenty have body confidence issues.

A survey by pollsters TNS Sifo for Nordic clothing brand Dressmann suggests that 37 percent of men living in Sweden in Norway experienced negative feelings about their appearance during the first six months of this year.

Just 30 percent said they had felt similarly concerned about their relationships, while 34 percent reported being as worried about their finances.

Following in the footsteps of UK-based beauty brand Dove, which has long used advertisements to celebrate the bodies of women of all shapes and sizes, Dressmann is launching a new underwear campaign featuring ‘ordinary’ men in an attempt to change attitudes. The company said it had become “lost in the fashion industry’s ideals” and wanted to come “back to reality”.

The firm’s initiative includes a video set to a dance cover of Billy Joel track ‘Just The Way You Are’ by Maja Francis, which begins with the lyrics “don’t go changing, to try and please me”.

The film features older and younger men of different sizes modelling the brand’s underwear, with the same models also posing for posters that are set to be displayed around Nordic towns and cities.

“We hope to contribute to changing the one-sided picture of bodies and body ideals that the fashion industry promotes,” said Dressmann’s marketing director Knut Vidar Nilsen in a press statement.

“We want to overcome the idea that some bodies are better, more beautiful or more normal than others. We want to simply show that there is not a perfect man, just perfect men.”

More than 2,000 people from Norway and Sweden aged between 16 and 79 were interviewed for the TNS Sifo study, which took place between June 26th and July 1st.

Posters put up on the Stockholm subway which featured a variety of women posing in lacy bras were accused of being “sexist” by a former advertising copywriter, which led to a hot debate on social media and complaints to Sweden’s advertising watchdog. “It's not underwear or nudity in itself that's the problem. There are thousands of ways to take a picture…The problem with this type of advertising is not what it shows, but how it shows it. The women's bodies, poses and facial expressions make them sexualized,” said copywriter Nina Åkestam who led the campaign against the images.