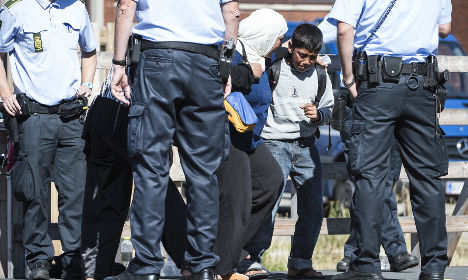 Danish police intercept a train carrying hundreds of refugees. Photo: Jens Norgaard Larsen/TT
Denmark has been faced with a complicated and chaotic situation this week after an influx of Sweden-bound refugees – numbering over 1,000 – arrived on various ferries from Germany to the southern town of Rödby.
Many of the refugees are afraid to be registered in Denmark, preferring to make it to Sweden which takes in more asylum seekers and where some of them have relatives.
Danish police tried to step up their game on Wednesday, stopping three separate trains containing a combined 500 refugees, according to the AFP news agency.
While most passengers refused to get off the trains, around 30 jumped off and fled from officers, but most of them were detained by police and sent to a refugee centre.
Police ensured afterwards that all train traffic between Denmark and Germany was ground to a halt.
Photo: Jens Norgaard Larsen/TT
Later on Wednesday, Danish police closed part of a motorway near the German border as around 300 migrants set off on foot to Sweden.
They had been housed in an old school building after arriving in Padborg, a town in the western region of Jutland that borders Germany, but headed for the motorway, saying they wanted to go northward to Sweden.
The distance on foot is 300 kilometres (180 miles) to Copenhagen, then a train ride from the Danish capital to the southern Swedish city of Malmö.

READ ALSO: Stockholmers gather to welcome refugees
The school “is not a prison and there is no fence around it. When 300 people at once decide to leave the school we take a dialogue-based approach,” local police said in a statement.
“Police have chosen not to intervene with force” but was “following the group,” it said.
Overnight, 42 refugees arrived in Sweden, significantly less than the 230 who made it to Sweden on Monday night.
A spokesman at the Malmö branch of the national migration board,  Migrationsverket, couldn't be sure what to expect on Wednesday night.
Photo: Jens Norgaard Larsen/TT
“We don't know how it will go, it all depends on the developments in Denmark and Germany,” he said.
While Sweden has become a top EU destination for refugees by issuing permanent residency to all Syrian asylum seekers, Danish authorities have sought to reduce asylum claims by issuing temporary residence permits, delaying family reunifications and slashing benefits for newly arrived immigrants.
On Tuesday Denmark sent back a first group of refugees who arrived from Germany, with others expected to follow.
But Sweden has urged Denmark to register the latest raft of refugees.
“Denmark is a rich country and is able to take care of the refugees. According to the existing rules there is also the opportunity for family reunification if the refugee has family in either Denmark or Sweden. How Denmark chooses to interpret the rules is up to Denmark,” Sweden's justice ministry told Danish public broadcaster DR on Tuesday.
Meanwhile Danish Integration Minister Inger Støjberg told Danish television network TV2 she had spoken to Swedish officials about the possibility of a deal that would allow Sweden to receive the refugees. But she said that “no agreement” had been reached.