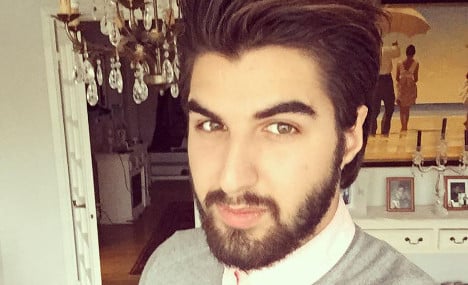 Uppsala resident Rodan Ulusoy. Photo: Private
The resort town of Bodrum, in south western Turkey, hit headlines the world over last week when the now infamous image of a dead toddler washed up on a local beach was published.
The image sent shockwaves around the world and one of those it touched was 20-year-old Uppsala resident Rodan Ulusoy, who was set to visit the Turkish city on a holiday.
After his parents, who live in Sweden but hail from Turkey, suggested he do something to help out, he contacted travel agency Fritidsresor to ask for additional luggage allowance, then rallied his friends to open their hearts, wallets, and cupboards.
The response was impressive.
The young Swedes filled 20 kilos worth of hygiene products, food, toys, and candy into a suitcase – together with 2,000 kronor ($237) in cash.
“It was so touching,” Ulusoy told The Local from Turkey.
“I think Swedes started to show a lot of empathy after that picture of the dead child was published.” Ulusoy and his Arabic-speaking friend Bilal (pictured above) took the extra gear along with them to Bodrum, then headed out to hostels where refugees were staying in nearby Bitez.
There, they met families from Syria who were heading north into Europe, doling out the cash, food, and the toys for the children wherever they could.
“The children were so happy to get toys, they said thank you a thousand times. The happiness in them was so touching,” he said.
He added that he met one mother who started to cry when she realized the tourists weren't police, but were bringing relief from Sweden.
He even said that he had bumped into other Swedes who had put their Turkish holiday on pause to help the refugees.
READ ALSO: Nordic tourists rush to help refugees in Greece
Back in Sweden, Ulusoy said that the attitude of the nationalist far-right Sweden Democrats had left him almost speechless.
“The Sweden Democrats are talking about numbers, statistics, money. It makes me so upset to think they can even talk like that. Me, I see the refugees as humans,” he explained. Photo: Private
“This is the worst refugee crisis in modern times. People are running for their lives. And the Swedes are starting to realize that these people aren't just coming because they want to. I think, and I hope, that every Swede will understand.”
The young Swede encouraged other Swedes to think twice about what to bring on their next holiday.
“As an old teacher said of mine said: It's impossible to do everything, but if we can all do something small then it can really make a difference.”
The initiative in Turkey follows separate campaign by several Nordic tour operators to allow tourists to take up to 20 additional kilos of goods to Greece.
Last week a spokesperson for Ving told The Local that 500 passengers had carried over ten tonnes of supplies including clothes, blankets and toys on flights from Scandinavia to the Mediterranean.