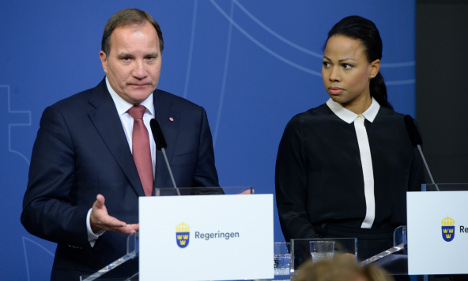 He said that municipalities, religious groups, sports associations, unions and public sector employers would all be invited to a major conference in October to discuss how to help refugees better integrate into Swedish communities.

The Prime Minister told Swedish public broadcaster Sveriges Radio that he wanted a more even distribution of refugees across all 290 municipalities in Sweden, a policy that has been pushed by Sweden's integration minister Ylva Johansson in recent months.

At a press conference in Stockholm at midday, ahead of cross-party talks on the refugee crisis, Löfven said there would be a large focus on getting refugees into schooling and the work force.

“This is about them having a speedy entrance into our society and getting a job, education, and housing,” Löfven told reporters.
“For us to be able to get through this demographic challenge, we need to get more working. This means we need to quickly get those who have newly arrived into the work force. This is what our investments are aiming for.”
One concrete change that was announced at the press conference was an increase in the compensation for municipalities per refugee, which will be raised from 83,100 kronor ($9,867) to 125,000 kronor ($14,873).
The government said it would earmark 1.8 billion kronor for the entire package to be spent over the next year. 870 million kronor of this will go into helping refugees find work quicker, offering speedier translation and validation of foreign education degrees, and a boost in Swedish language learning services on offer.
Speaking with Aftonbladet TV after the press conference, Löfven said that refugees would be helped to integrate on an individual basis based on their skills and needs.
“Some have good work experience, we have doctors, teachers and nurses arriving, and we need to make sure they get quickly into work that they are qualified for,” he said.
“Others need more time to get into the workforce, so we need to get these people educated as quickly as we can.”
He said that the refugee crisis was an “extremely difficult” situation right now.
“These people are running for their lives. The war in Syria needs to end. But for now, we have good asylum politicies of solidarity for those arriving in Sweden.”
Integration Minister Ylva Johansson added that the goal was to get newly arrived refugees into work, or into education, within two years. The leaders of Sweden’s centre-right Alliance parties which made up former Prime Minister Fredrik Reinfeldt’s previous government are set to attend discussions with Löfven later in the day, along with the leaders of the government’s coalition partners the Greens and the Left Party. The nationalist anti-immigration Sweden Democrat party has not been invited.

“We must have a political gathering, both about what we’re doing here at home in Sweden, but also what Sweden stands for in the EU,” said Löfven, adding that it was currently “unhelpful” that Sweden and Germany were currently sharing the bulk of responsibility for new arrivals.

Sweden’s Prime Minister met Germany’s Chancellor Angela Merkel in Berlin earlier this week. Both leaders told a press conference that they backed the introduction of new quotas to force other European countries to take in more refugees, as is being proposed by the European Commission.

The Nordic nation currently takes in more refugees per capita than any other EU member state.

Sweden’s Migration Board (Migrationsverket) received a total of 11,743 applications for asylum last month, up from 6,619 in June and 8,066 in July, as an increasing number of refugees headed for Scandinavia over the summer.