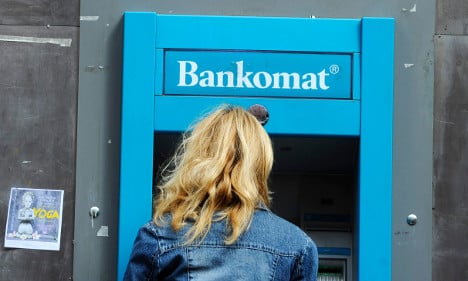 Eighty cash machines in Sweden will get a test run with the new notes. Photo: TT
Requesting a 200-kronor ($23.90) withdrawal from your local ATM could soon leave you walking away with just one note – rather than two 100-kronor notes as it would today.
Sweden's national cash machine company, Bankomat, announced on Thursday that the small-scale test would begin on October 6th, reported the TT news agency, as part of the national shift to brand new bank notes in October.
The company explained that the limited release was so the company could test how the ATMs handled the notes.
ATMs will distribute the new 200-kronor bills, which feature an image of Sweden's legendary film director Ingmar Bergman (see below), in the following towns and cities across the nation:
Borlänge, Enköping, Gävle, Göteborg, Hedemora, Huskvarna, Jönköping, Kalmar, Karlskrona, Kramfors, Kristinehamn, Lindesberg, Linköping, Lyckeby, Malmö, Nässjö, Olofström, Sandviken, Skellefteå, Stockholm, Sundsvall, Sörberge, Timrå, Umeå, Visby, Västervik, Västerås, Växjö and Örebro.

Photo: Riksbank
The notes will be available from all the rest of Sweden's machines from the start of 2016.

Other changes to Sweden's currency will come into play on October 1st, with over 300 million bank notes and two billion coins to be replaced as part of the gigantic project.

A fresh collection of bills featuring the likes of Swedish legends such as actress Greta Garbo and children's author Astrid Lindgren will replace other famous Swedes such as Nobel Laureate Selma Lagerlöf, botanist Carl Linneaus and King Gustav Vasa over the next couple of years.

IN PICTURES: What will Sweden's new notes look like? The new notes were designed by Göran Österlund, whose colourful “Journey of Culture” (Kulturresan) design was selected from among eight finalists back in April 2012.

Swedes have become less dependent on cash in recent years and as The Local reported in October, four out of five purchases in Sweden are made electronically or by debit card.

Researchers from Oxford University discovered in 2013 that Sweden's cash was among the filthiest in Europe, with bank notes containing more bacteria than all others across the continent. One would think that, at least temporarily, this will change when the new notes come into play.