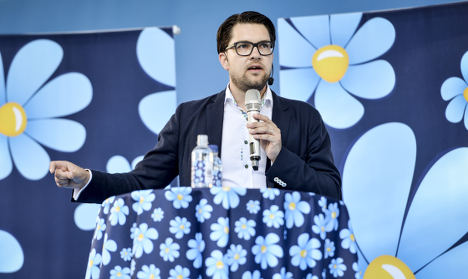 Jimmie Åkesson, leader of the Sweden Democrats, is under fire. Photo: Henrik Montgomery/TT

Åkesson’s decision came in the wake of the election to the SDU leadership of Jessica Ohlson, against the express wishes of Åkesson and other senior members of the party, who had pushed for Tobias Andersson as the party’s preferred choice of chairperson.

“The party has taken over the SDU's website. We want to show that we mean business,” Åkesson told Swedish broadcaster SVT.

“There has been conflict for several years – we don’t see any point in continuing the relationship,” Åkesson said. “The SDU would not stand behind us on social conservatism and democracy. We do not accept deviations from our path of ideology.”

Gustav Kasselstrand, the former chairman of the Sweden Democrats’ youth wing was furious with the senior leadership of the far-right party.

“They make a mockery of themselves. They will do anything to secure their own power and their own salaries,” he told Aftonbladet.*

The Sweden Democrats, who want to severely restrict immigration, have already started another youth party union – with the same name. This will almost certainly be disputed by the SDU. Who owns the rights to the name SDU may determine whether the Sweden Democrats must implement a constitutional amendment, which requires 75 percent of the votes at the party's congress, to have the right to start a new youth wing.

“It is merely a technicality. It will not be of any importance,” said SD's press officer Henrik Vinge.

“If they start another wing with the same name, we will take legal action,” said the SDU's newly elected president Jessica Ohlson.

A Yougov poll published on August 20th credited the Sweden Democrats with 25.2 percent of voter sympathy, making it the biggest party for the first time in a poll, ahead of Prime Minister Stefan Lofven's Social Democrats with 23.4 percent.

However, another recent poll conducted by the Novus institute, credited the Sweden Democrats with only 18.6 percent and the Social Democrats with 25.8 percent.

All seven other parties in parliament refuse to take on the Sweden Democrats as allies, and have rejected their anti-immigration stance.

*An earlier version of this article incorrectly attributed certain quotes to Gustav Kasselstrand that should have been attributed to SDU's former vice chairman William Hahne. The quotes have been removed. The Local apologises for any confusion.