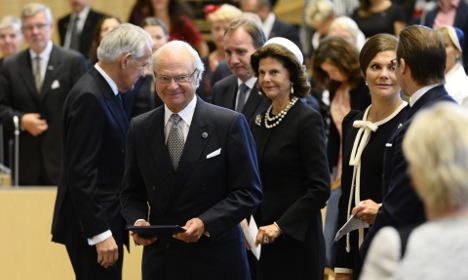 Sweden's King Carl XVI with Queen Silvia on Tuesday. Photo: Anders Wiklund/TT
Sweden has 349 members of parliament (MPs) and they were summoned for a roll-call at 11am on Tuesday morning at the historic Riksdag building in Stockholm, following a service at the city's cathedral.
At 1pm there was fanfare from the Royal Swedish Army Band and traditional dances performed by Sweden's Folk Dance Society, Folkdansgillet Kedjan, on the concourse outside parliament.
Members of Sweden's royal family then headed to the Riksdag, where King Carl XVI Gustaf declared parliament open for its 2015-2016 session.
In his address to MPs, the king focused on Europe's refugee crisis.
“In recent weeks the number of people displaced has increased dramatically. It is a tragedy that has touched all of us emotionally,” he said.
“Not Since the end of World War Two have so many people been on the run….What will the world look like in 70 years? For our children and grandchildren?” he added. The king in parliament on Tuesday. Photo: Jessica Gow/TT
The opening of parliament marks the start of a second year in power for the Nordic country's Social Democrat Prime Minister Stefan Löfven, after his party became the biggest in Sweden in the last general election in September 2014.
He wore a Swedish flag on his lapel in the chamber, and also focussed on refugees in his speech.
“I believe in a Sweden that we create together, which is something bigger than just a gathering of people in a geographic area, which is a community where we feel responsible for one another,” he said.
In recent weeks the Prime Minister has been increasingly vocal about the refugee crisis and called for other EU member states to take in larger numbers of asylum seekers, while promising to keep Sweden's borders open.
The Swedish leader also used his appearance to talk about growing tensions with Sweden's eastern neighbour, Russia.
“The Russian aggression and destabilization of Ukraine is the most serious challenge to European security arrangements since the Cold War,” he argued.
But he remained firm on his view that Sweden “should not seek Nato membership”, arguing that Sweden's “military alliances still serve our country well.” Prime Minister Stefan Löfven at parliament. Photo:Jessica Gow/TT
On Tuesday evening MPs and their guests were set to attend a performance of the ballet Raymonda at Sweden's Royal Opera in Stockholm.
Sweden's Royal Court confirmed that Queen Silvia, Crown Princess Victoria and Prince Daniel would be present, alongside country's newest royal couple, Prince Carl Philip and Princess Sofia, who got married earlier this summer. King Carl XVI and Queen Silvia on Tuesday. Photo: Maja Suslin/TT
Sweden's Princess Madeleine flew in from London to attend the opening of parliament, having recently relocated to the UK. But she was scheduled to fly home before the ballet so she did not have to spend a night away from her son Prince Nicolas, who was born in June.
“It is not possible to participate in the evening event because Prince Nicolas is only three months old,” Margareta Thorgren, Head of Media Relations for the Royal Court, told Sweden's Expressen newspaper on Tuesday morning.
Madeleine's British-born financier husband Chris O'Neill did not attend any of the day's activities due to business commitments.