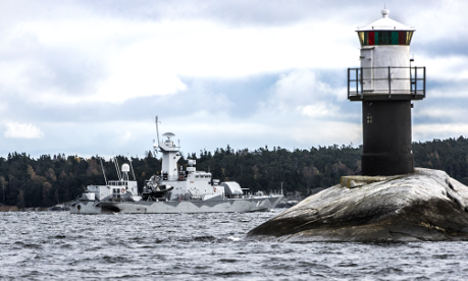 Sweden's military searching for a foreign vessel in Stockholm's archipelago in 2014. Tomas Oneborg/SvD/TT

Sweden saw foreign powers violate its territory ten times between the start of this year and September 14th, according to the Armed Forces.

That compares to 13 similar incidents throughout the whole of last year and just three times back in 2011.

Unlike some of its neighbouring countries – Finland immediately publishes reports of incursions and occasionally also pictures of planes violating its airspace – Sweden tends to, in most cases, keep this information under the wraps.

But Defence Minister Peter Hultqvist told the Dagens Nyheter (DN) newspaper on Wednesday that from now on the Armed Forces will report confirmed incursions within hours.

“Our ambition is to adapt to Finland and have increased transparency so that people find out what is going on. This is very important against the backdrop of increasing military exercises and raised military activity in the Baltic Sea area,” said the Social Democrat minister. Under the new guidelines, the Armed Forces will be obliged to inform the government of territorial violations within four hours. The government will then decide whether or not to release the information.

Six hours after the incident the military will also be able to inform the public by publishing details about the incursion on their homepage.

The re-positioning comes amid an uptick in Russian military activity in the past year.

In October, a week-long search for a suspected Russian submarine in waters off Stockholm was called off, with the military unable to identify the intruding vessel.

A series of alleged airspace violations by Russian jets over the last year has also raised jitters in Sweden.