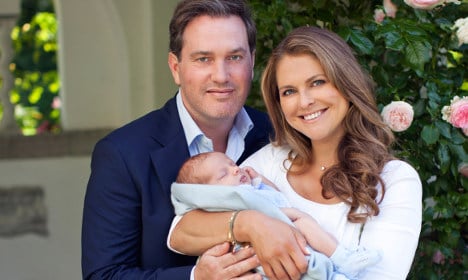 Royal fans were getting excited as fresh details emerged about the christening of Sweden's youngest prince, which is set to take place at Drottningholm, the Swedish royal family's palace just outside Stockholm, on October 11th.

It was revealed on Thursday that the ceremony will be conducted by Sweden's archbishop Antje Jackelén, assisted by bishop emeritus Lars-Göran Lönnermark and royal chaplain Mikael Bjerkhagen.

Invited guests will gather for a private lunch after the ceremony.

The event will be Jackelén's first royal baptism. The outspoken minister, who has sparked headlines saying there is no contradiction between believing in God and evolution, was sworn in as Sweden's first female archbishop in June 2014.

“I look forward to christening Prince Nicolas. The baptism is a seemingly simple act with great power,” the archbishop told The Local on Thursday.

“Neither performance nor consumption gives our lives their deepest meaning. However this does, to belong to that which is the greatest, best and most beautiful we know: God. The Church's conviction is that this is the most beautiful gift — and the most important task — a human can receive, even a prince.”

Nicolas is set to be christened in the same dress worn by all members of the royal family before him, including his sister Princess Leonore and King Carl XVI Gustaf. Special water for the formal ceremony is being brought in from a spring on the island of Öland, where the royal family owns a residence and Nicolas' mother, Princess Madeleine, spent many of her childhood summers.

Princess Madeleine, 33, and Chris O'Neill, 41, have kept a low profile since the birth of their baby prince, whose older sister Leonore is 19 months old. They will be travelling to Sweden from their new London home.

Nicolas – who was born on June 15th – will be formally named Nicolas Paul Gustaf Bernadotte O'Neill.

One of the prince's middle names – Paul – honours Chris O'Neill's father Paul Cesario O'Neill, who died in 2004, while Gustaf is a name more commonly taken by members of the Swedish royal family. Bernadotte is the Swedish royals' family name. Prince Nicolas at the age of one month. Photo: Jonas Ekströmer/TT

Thursday's announcement about the christening comes just two weeks after Sweden's Crown Princess Victoria and her husband Prince Daniel announced – on Instagram – that they were expecting their second child.

The heir to Sweden's throne is expected to give birth in March. The couple already have a daughter, Princess Estelle, who is three and a half years old.